SANTA CLARA, February 2, 2016 – The National Association of the Deaf (NAD), the National Football League, PepsiCo, and CBS are honored to announce that Academy Award winner Marlee Matlin will convey the beauty of American Sign Language (ASL) at Super Bowl 50 in Santa Clara, California.

Earlier today, the National Football League and CBS announced that Matlin will be joining Lady Gaga to perform the National Anthem during the Super Bowl 50 pregame festivities on Sunday, February 7, 2016.

“The iconic Marlee Matlin will showcase the beauty of American Sign Language at Super Bowl 50,” said NAD CEO Howard A. Rosenblum. “The National Anthem is a time honored tradition that is accessible to all Americans thanks to the NFL and PepsiCo.”

“We are honored to have Marlee Matlin sign the National Anthem,” said NFL SVP of Social Responsibility Anna Isaacson. “With American Sign Language as part of the pregame festivities, all fans, including those who are deaf and hard of hearing, can enjoy the Super Bowl experience equally.”

The NAD applauds the NFL for its full support for American Sign Language by ensuring that at every Super Bowl, the National Anthem is signed by ASL artists such as Marlee Matlin.

In addition, the NFL and CBS Sports will provide live streaming of Marlee Matlin and her entire performance in the CBS Sports apps for Xbox One and Windows 10, which will offer viewers alternate camera angles in addition to the broadcast coverage.   Further, CBS Sports has ensured that the Super Bowl will be fully captioned including the game as well as all of the exciting national commercials and network promotions. The NAD commends the NFL and CBS Sports for making the Super Bowl an accessible experience.

PepsiCo has been a generous sponsor and partner of the NAD in bringing ASL artists to the Super Bowl, and is proud to be able to bring in Marlee Matlin as the ASL artist at Super Bowl 50. PepsiCo and the NAD have been Super Bowl partners beginning with the broadcast of a :30-second “silent ad” filmed entirely in ASL that debuted during the pre-game show of Super Bowl XLIII in 2008 and has continued with annual sponsorship of the American Sign Language anthem performer including John Maucere (Super Bowl XLVII), Amber Zion (Super Bowl XLVIII), and Treshelle Edmond (Super Bowl XLIX).

The NAD extends its gratitude and appreciation to PepsiCo and its EnAble group for their extraordinary support of the deaf and hard of hearing community.  PepsiCo has been a strong partner in transforming how society perceives the community, including enhancing the visibility of American Sign Language.

About the National Association of the Deaf
The National Association of the Deaf (NAD) is the nation’s premier civil rights organization of, by and for deaf and hard of hearing individuals in the United States of America. Established in 1880, the NAD was shaped by deaf leaders who believed in the right of the American deaf community to use sign language, to congregate on issues important to them, and to have its interests represented at the national level. These beliefs remain true to this day, with American Sign Language as a core value. The advocacy scope of the NAD is broad, covering a lifetime and impacting future generations in the areas of early intervention, education, employment, health care, technology, telecommunications, youth leadership, and more – improving the lives of millions of deaf and hard of hearing Americans. The NAD is a 501(c)(3) nonprofit organization supported by the generosity of individual and organizational donors, including corporations and foundations.

About Marlee Matlin
Marlee Matlin received worldwide critical acclaim for her film debut in Paramount Pictures’ “Children of a Lesser God,” for which she received the Academy Award for Best Actress. At 21, she became the youngest recipient of the Best Actress Oscar and only one of four actresses to receive the honor for her film debut.  In addition to the Oscar, Marlee received the Golden Globe Award for Best Actress in a Drama. Since then, Marlee has starred in numerous features including “Walker,” “The Player,” “Hear No Evil,” “It’s My Party,” and “What the Bleep Do We Know.” She has also starred in TV telefilms such as “Bridge to Silence,” “Against Her Will: The Carrie Buck Story,” “Dead Silence,” “Freak City,” “Where the Truth Lies,” and Hallmark Hall of Fame’s “Sweet Nothing in my Ear.”  Marlee also starred in her own NBC series “Reasonable Doubts” opposite Mark Harmon and the Emmy Award winning “Picket Fences.” Marlee was twice nominated for a Golden Globe Award as Best Actress in a Television Drama as well as the People’s Choice Awards. She has been nominated for four Emmy awards for her appearances on “Seinfeld, “Picket Fences,” “The Practice” and “Law and Order: SVU.” Marlee starred for seven years on the award winning drama, “The West Wing, ” and has made numerous guest appearances including “ER,” Desperate Housewives,” CSI: New York,” “Extreme Makeover: Home Edition,“ Desperate Housewives,” “Nip/Tuck,” “CSI,” Glee,” and “Family Guy.” In 2007 Marlee joined “The L Word” for three seasons. Marlee broke barriers once again when she starred on ABC’s “Dancing with the Stars,” and in 2015, she returned to the stage after a 30 year hiatus and made her Broadway debut in the revival of the Tony Award winning musical, “Spring Awakening.”  In 2009, Marlee published her New York Times Best Selling autobiography, “I’ll Scream Later” and has authored three novels for children including “Deaf Child Crossing” and “Nobody’s Perfect.”  In 2015 she developed her first app for teaching American Sign Language, “Marlee Signs.” Marlee currently stars on the Peabody Award winning series, “Switched at Birth.” Marlee makes her home in the Los Angeles area with her husband, a law enforcement officer, and their four children.

About PepsiCo
PepsiCo is a global food and beverage leader with net revenues of more than $65 billion and a product portfolio that includes 22 brands that generate more than $1 billion each in annual retail sales. Our main businesses – Quaker, Tropicana, Gatorade, Frito-Lay and Pepsi-Cola – make hundreds of enjoyable foods and beverages that are loved throughout the world. PepsiCo’s people are united by our unique commitment to sustainable growth by investing in a healthier future for people and our planet, which we believe also means a more successful future for PepsiCo. We call this commitment Performance with Purpose: PepsiCo’s promise to provide a wide range of foods and beverages from treats to healthy eats; to find innovative ways to minimize our impact on the environment by conserving energy and water and reducing packaging volume; to provide a great workplace for our associates; and to respect, support and invest in the local communities where we operate. 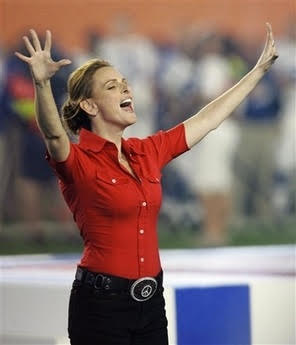