As graduating students Friday packed up to head home or to start new chapters in their careers, many paused one last time to look back on their college years and reflect on their achievements.

Several students at Rochester Institute of Technology’s National Technical Institute for the Deaf were honored with their families and friends at an Academic Awards Luncheon prior to their graduation ceremony.

“This is an amazing group of graduates who are going to change the world,” NTID President Gerry Buckley said.

Also in attendance was a visitor from the U.S. Department of Education. Michael Yudin, acting assistant secretary for Special Education and Rehabilitative Services, is Saturday’s NTID graduation speaker.

“I congratulate the students on this incredible achievement,” Yudin said at the luncheon. “Too many of our kids don’t even go to college. Many drop out in high school. That means many of them become relegated to low-paying jobs, higher rates of poverty and higher rates of relying on social services. Education is not just a moral imperative. It is an economic imperative. So thank you for persevering and putting in the hard hours.”

The graduates who received awards:

Other students who had recent achievements include: 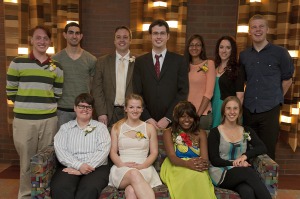