10 Famous Books that Have Deaf Characters You Didn’t Know 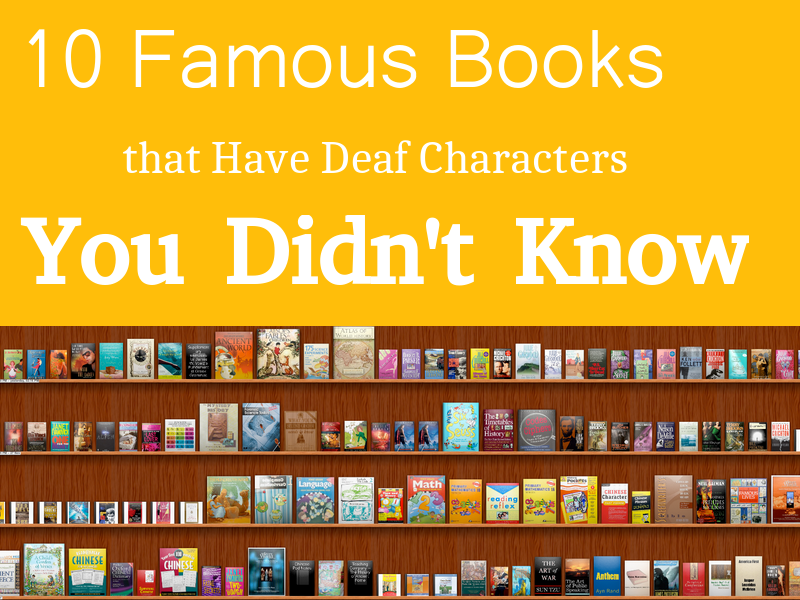 10 Famous Books that Have Deaf Characters You Didn’t Know

Literature has always been touted as an all-encompassing field. Whatever your station in life is, no matter what race, gender, or age, there’s bound to be a literary piece (novel, poem, short story, screenplay) out there that you can positively identify with.

Some people say that there is a severe lack of deaf representation in today’s literature. This is slightly true though, popular novels with deaf characters are very hard to come by. But if you look hard enough, you’ll see that a lot of famous authors have already introduced interesting deaf characters into their works. Here are ten famous books with deaf characters you didn’t know:

For Whom the Bell Tolls by Ernest Hemingway

For Whom the Bell Tolls is a war novel by Ernest Hemingway (The Old Man and the Sea, The Importance of Being Earnest) borne out of his experiences covering the Spanish civil war. The deaf character in this novel is El Sordo, literally “the deaf one,” who is an antifascist guerilla leader.

To Kill a Mockingbird by Harper Lee

To Kill a Mockingbird is one of the best pieces of literature that came out of the 20th century. Two minor deaf characters were featured in the book- the sisters Tutti and Frutti. The neighborhood children pulled a prank on them in Chapter 27, taking all of the women’s furniture out of their cellar.

This action-packed pageturner is one of Dan Brown’s first books (along with Deception Point, Angels and Demons, and the Da Vinci Code) that gained him international fame. Digital Fortress has one deaf character in the form of Hulohot, a mysterious assassin hired by the villain Strathmore.

The Heart is a Lonely Hunter by Carson McCullers

Considered by many as one of the finest pieces of Southern Gothic literature ever written, The Heart is a Lonely Hunter is also one of the few classics wherein the deaf character IS the main character. At the heart of all the action is John Singer, a deaf-mute who served as a trusted confidante for all the misfits and outcasts of his town.

The Hunchback of Notre-Dame by Victor Hugo

If you’ve only watched the Disney movie, then this information might come as a bit of a surprise to you: not only was Quasimodo disfigured and with a hunchback, he is also deaf in the novel. This is due to the loud ringing of the bells he works with as a bell-ringer for the Notre-Dame.

The History of the Life and Adventures of Mr. Duncan Campbell by Daniel Defoe

Daniel Defoe is known for his more popular works Robinson Crusoe and Moll Flanders. What most people don’t know is that he has quite a multitude of novels written, including this book about Mr. Duncan Campbell. Mr. Campbell, is in fact a real person, a soothsayer (i.e. a mystic or clairvoyant) who lived during Defoe’s time.

Raise High the Roof Beam, Carpenters is a novella written by JD Salinger which was originally published in the New Yorker in 1955. It tells the story of Seymour Glass’ wedding through the eyes of his brother Buddy. The uncle of Seymour’s wife Muriel is deaf-mute, a fact that Buddy learns soon after meeting them.

For the Sake of Elena by Susan Elizabeth George

This book is one of the more contemporary offerings in this list. For the Sake of Elena is actually part of a series, the fifth book in Susan Elizabeth George’s highly popular Inspector Lynley mystery novels series. The death of the deaf character (a sexually liberated college-aged girl) is the mystery that the protagonist Inspector Thomas Lynley needed to solve.

The Mansion by William Faulkner

The Mansion is the last novel in Faulkner’s trilogy of the Snopes family. Linda Snopes is one of the characters in the novel with a tragic backstory: her Jewish husband was killed in the war, she was subjected to harassment by her fellow townspeople and the FBI, and she also became deaf due to the noise of artillery fire.

This tragic novel tells the story of Ellie Perkins, a teenager living in Georgia during the 1940s, and how her life changed when she discovered Alice, an abused deaf and epileptic girl kept in isolation by her cruel father.

MA Miravite is a freelance writer who loves poetry, indie films, and martial arts. You can read more of her rants and writings at www.solohustling.wordpress.com.