Robert F. Panara, much beloved professor emeritus at Rochester Institute of Technology, author, poet, historian and international authority on deaf figures in literature, and the National Technical Institute for the Deaf’s first deaf professor, died July 20. He was 94 years old.

Panara, who was the first deaf person to earn an academic teaching position after graduating from New York School for the Deaf in White Plains, N.Y., and the first deaf person to earn a master’s degree in English from New York University, retired from NTID in 1987. Upon his retirement, the college named its theater after him and created a scholarship fund in his honor.

Panara was born hearing in Bronx, N.Y. At age 10, he contracted spinal meningitis, which left him profoundly deaf. He attended mainstream public schools and often relied on classmates to take notes for him or mouth words so he could lipread.

He graduated from DeWitt Clinton High School in New York City, learned sign language at the American School for the Deaf in Hartford, Conn., and then earned a bachelor’s degree at Gallaudet College (now University) in 1940, where he wrote several papers that established him as a leader in the field of deaf education. “The Significance of the Reading Problem” expressed his belief that “what the world needs today is more teaching that comes from the heart and soul and not of the coldly conservative and somewhat reticent mind.” This insight would form his teaching style.

Panara’s love of drama and theater made his classes some of the most sought after by both deaf and hearing students.

In 1965, he was invited by U.S. Secretary of Education John Gardner to serve on a national advisory board for the establishment of NTID. He began his career at NTID in 1967 and became its first deaf professor. He also established the English department at NTID where his son, John, currently teaches. Throughout the years, Panara won a number of awards and distinctions including the RIT Founders Award, the NTID Student Association Outstanding Staff Award and the RIT Eisenhart Award for Outstanding Teaching. He also holds honorary degrees from Gallaudet University and MacMurray College.

He founded the NTID Drama Club and was a founding member of the National Theatre of the Deaf, and has been honored by the World Federation of the Deaf for his contributions to education and culture.

He was an avid poet, lover of Shakespeare and theater, and fan of baseball and the Rochester Red Wings.

In an interview story posted on StoryCorps in 2009, Panara spoke about his lifelong fascination with baseball including a 1931 meeting his father arranged with his hero, Babe Ruth. Panara said, “Shaking hands with the Bambino was a dream come true.”

Harry Lang, NTID professor emeritus and a close friend of Panara, always admired his positive outlook on life and the way he engaged students in the classroom.

“Many people search in life for best friends,” said Lang. “I was fortunate to have found mine in Bob. Bob and I met at NTID in 1970, and in all of those years, I have never met a man who was more loved, respected and inspirational—and that is not an exaggeration. Bob was the perfect example of someone who was able to masterfully marry his life, teaching and interests in a beautiful way that inspired others—and that brought him so much fulfillment.”

Lang also shared the impact Panara had on the deaf world.

“Before the 1960s, many people looked down at sign language; it was not respected,” Lang explained. “At that time, Bob was advising the National Theatre of the Deaf and his work helped the actors show the beauty of American Sign Language and opened minds and doors in so many ways. He had a true talent for translating the most complex of subjects, like Shakespeare, into ASL. ”

In a letter Monday to the NTID community, President Gerry Buckley said, “Bob’s legacy is indeed vast. Thousands of students and graduates have been influenced by his genuine love of teaching and his generous sharing of his beliefs, values and knowledge.”

Panara was predeceased in 2003 by his wife, Shirley Fischer Panara. He is survived by his son, John; daughter-in-law, Janis; grandchildren Bill and Erin; great-grandchildren Annabelle and Natalie; and his sister, Eleanor Lynch.

Funeral arrangements are pending. A campus memorial service is being planned for the fall. 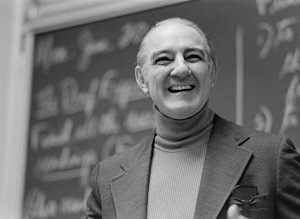 SG Mission: to serve our viewers by providing reliable, valuable, and important Deaf community oriented information in every newcast.
%d bloggers like this: