For the second consecutive time, a team from Rochester Institute of Technology’s National Technical Institute for the Deaf won the National Association of the Deaf College Bowl Championship for deaf and hard-of-hearing college students.

The academic trivia contest, held every other year at the National Association of the Deaf Convention, was held July 3 at the NAD convention in Atlanta. Other teams represented the Southwest Collegiate Institute for the Deaf, Big Spring, Texas; the University of Texas at Austin; the University of Minnesota at Minneapolis; Gallaudet University in Washington, D.C.; and California State University at Northridge.

“We could not have won without Chris Kurz and Gary Behm, and all the Chinese food they ordered during practice,” Epstein said. The team practiced each week since September, answering practice questions and playing mock matches with members from Rochester School for the Deaf and RIT/NTID faculty members.

“We owe it to them for getting first-hand College Bowl experience before the competition,” Epstein said.

This was the second straight NAD College Bowl competition won by the RIT/NTID team. Berger’s brother, Ethan, was on the winning team in 2012.

“The College Bowl was a thrilling and tense competition where every team had an equal chance of winning,” said Kurz. “With a balanced team of young brilliant scholars, we came out with a series of victories and got to keep the trophy home for another two years.”

NTID President Gerry Buckley was in Atlanta during the competition.

“We deeply appreciate the hundreds of loyal RIT/NTID Tigers, including fans and alums, who cheered our College Bowl team to victory and joined me in personally congratulating them for this second straight championship, ” he said. “The RIT/NTID community is very proud of our team and its coaches and all of the outstanding students we are honored to serve at RIT/NTID. We look forward to celebrating this accomplishment in the early fall when classes resume.”

The RIT/NTID was the youngest team in the competition, and Epstein said he and his teammates hope to compete again at the 2016 NAD convention in Phoenix. 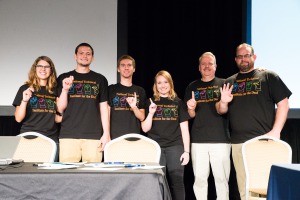