CHS under fire for the hiring of new CEO/President

0
Read Time:3 Minute, 13 Second
Written by Thomsen Young and you can follow him @

In a surprising announcement, the Chairperson of Canadian Hearing Society Board, Timothy Andradé, announced that they appointed Julia Dumanian to be CHS next President/CEO. According to their website, she will start her position on July 6th. Yet, this past week, the overall reception of her appointment has people within the Deaf Community on the edge.

Julia Dumanian does have a solid background with her CEO experience, however, recently, her history and most importantly, her spending history is not quite pretty.

In a simple Google Search under her name, two articles stood out in the top 10 results, “Former CMH president was big spender” of the Cambridge Times and “Expenses of Cambridge Memorial’s former president revealed” of The Record.

Here’s some of the big spending costs:

Julia Dumanian lived like a king in Cambridge. http://t.co/eRAGEYrE

Is this really the leadership that CHS wants to have?

What is even more mind blowing is that CHS is an organization that serves a majority of clients that are deaf. Why is this mind blowing? Julia Dumanian has no knowledge of ASL nor does she have any understanding of Deaf Culture. In this video, a long time client of CHS expresses her frustration with the appointment of Julia Dumanian and rightly so.

In her vlog, she expresses that she’s “very, very disappointed with CHS. I have lost respect for them. It’s time to get a qualified candidate with background in signing and Deaf Culture. Please speak out!”

Some even went on Facebook to question the hiring itself: 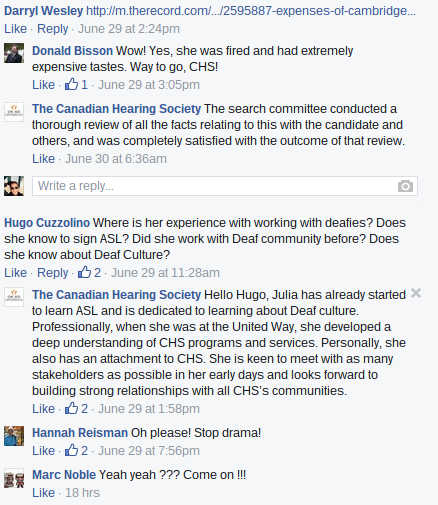 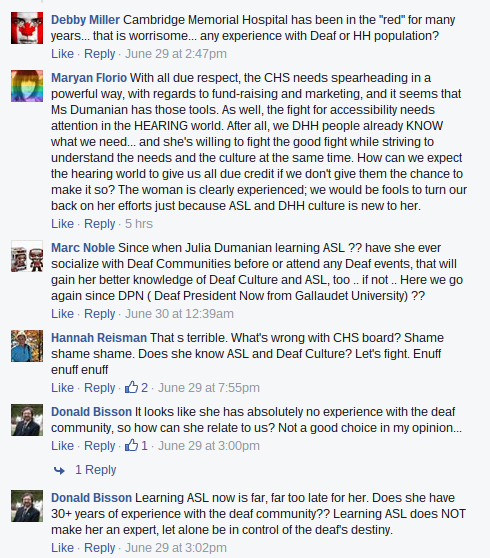 So the question remains, at any time during the search for a new CEO, were there any qualified deaf applicants?

According to the official, very bland response is “The search committee conducted a thorough review of all the facts relating to this with the candidate and others, and was completely satisfied with the outcome of that review.” which can be found on both Facebook and on their official website as well.

In a follow up email, we directly asked if at any time during the search there were any qualified deaf applicants. We still have not received a response.

Updated: July 3, 2015 @ 2:16 p.m. (PST): Timothy Andradé, Chair, Board of Directors of the Canadian Hearing Society responded to our question:

“We hired a well-respected executive search firm and used a broad-based advertising and networking approach to cast our net as widely as possible. Specifically, we advertised at Gallaudet University, The Canadian Hard of Hearing Association, CSAE (Canadian Society of Association Executives), Eluta.ca, Longwoods, Charity Village, University of Rochester, Rochester Institute of Technology and our own website.

The search firm, Bedford Consulting Group, used its own extensive database of more than 150,000 individuals and also advertised on its own website. Hundreds of potential candidates were identified including a number of consumers (people who are culturally Deaf, oral deaf, deafened and hard of hearing).

The selection committee identified the candidate whose skills and experience best matched the qualifications and profile established by the board. The search committee then presented its recommendation to the full board which then confidently approved the appointment.”