Proceeds from the game will endow the Oldtime Baseball Game/Dummy Hoy Scholarship, which will be awarded to a deaf or hard-of-hearing student from New England to attend Rochester Institute of Technology. For the first time, the game will be accessible to both deaf and hearing audiences: an additional six sign language interpreters will be placed throughout the area, the National Anthem will be signed as well as sung and four 70-inch television screens will be on hand to provide real-time captioning of all the action. No stranger to baseball, the captionist also provides real-time captioning at the Washington Nationals games.

The Oldtime Baseball Game is a celebration of our national pastime. From its humble beginnings in 1994, the game has grown considerably over the years yet remains loyal to its mission of offering a glimpse of what it was like in the old days, when hundreds of fans would turn out to root for their “town” team in various local semipro leagues. Players will wear flannel uniforms from virtually every era in baseball history. Used just once a year for the game, the uniforms represent such long-ago teams as the Boston Braves, St. Louis Browns, Homestead Grays and Kansas City Monarchs. Lonborg, the 1967 American League Cy Young Award winner, will wear a uniform he wore during his playing career.

Lonborg became familiar with RIT/NTID through his friendship with RIT/NTID alumnus and Framingham native Skip Flanagan, who was born deaf. Flanagan, who played baseball for the RIT Tigers and has played in the Oldtime Baseball Game since 2012, earning Most Valuable Player honors his first year, extended a personal invitation for Lonborg to play in this year’s game.

“We first met at a charity event and we’ve remained close,” said Lonborg. “I’ll probably only face a couple of batters, but he’s going to be one of them. As long as he pulls the ball, we should be OK.”

William “Dummy” Hoy, who played for seven big-league teams from 1888 to 1902, including five seasons with the Cincinnati Reds, is considered one of the game’s first well-known deaf players. He has been credited with helping to establish the “safe” and “out” calls that are used in baseball to this day. He was a lifetime .288 hitter. Flanagan, who earned a degree in Psychology and Exercise Science at RIT/NTID, has devoted much of his life to inspiring the National Baseball Hall of Fame to consider Dummy Hoy for induction.

“Dummy Hoy is a proven winner as he overcame all the obstacles, especially in the late 1800’s, and his perseverance is what everyone —  deaf or hearing — should have in order to be successful in all aspects of life,” said Flanagan. “He’s one of my biggest inspirations and has shown me how to dream big and then chase that dream.”

Although the Oldtime Baseball Game includes amateur players from schools throughout the Boston area and beyond, more than 40 past participants have gone on to play professionally.

St. Peter’s Field is located at 59 Sherman Street in North Cambridge, not far from the Fresh Pond Traffic Circle. From Route 128, take Exit 29A, picking up Route 2 East. Continue on Route 2 about 6.3 miles, to Route 16 East, being sure to bear left at the fork, following the “Arlington-Medford next left” sign. Follow to Massachusetts Avenue and turn right. Follow to Rindge Avenue and turn right. Follow to Sherman Street and turn left. Follow to St. Peter’s Field, which is on the right.

From Harvard Square, follow Massachusetts Avenue north about one-quarter of a mile, turning left on Linnaean Street. At the end of Linnaean Street, turn right onto Garden Street. Bear right at the firehouse onto Sherman Street and follow to St. Peter’s Field, which is on the left. 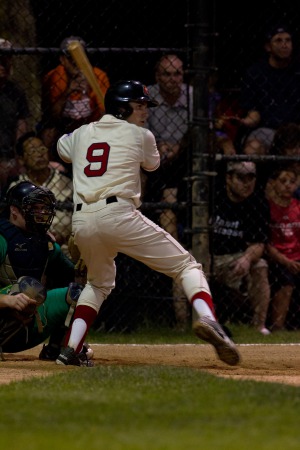