AC/DC have confirmed that Guns N’ Roses frontman, Axl Rose, will join the band for the rest of their world tour. He replaces singer Brian Johnson, who was forced to quit over hearing problems.

The band announced in a statement that Rose had “kindly offered his support” to help the band complete their Rock and Bust tour, which runs until June 12.

Johnson, 68, had been lead singer of the Australian band since 1980, but was recently told by doctors that he risked total hearing loss if he continued performing.

“AC/DC band members would like to thank Brian for his contributions and dedication to the band throughout the years. We wish him all the best with his hearing issues and future ventures,” the statement said.

The tour’s final leg is in Europe, beginning in Lisbon on May 7, with two dates in the UK – in London on June 4 and Manchester on June 9.

Rose, 54, last night played with Guns N’ Roses at the  prestigious Coachella festival in California, where the group were joined onstage by AC/DC guitarist Angus Young.

After his dates with AC/DC in Europe, Rose will rejoin his GnR bandmates for their ‘Not In This Lifetime’ summer tour, when it starts on June 23. 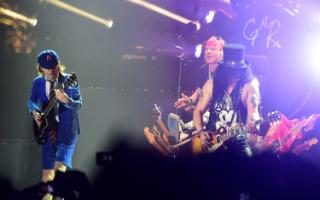