dad’s tatts lend an ear to his kids

The Taupo father who got a cochlear implant tattoo to match his daughter’s real one now has another – this time for his son.

Alistair Campbell had his first tattoo when his daughter, Charlotte, 7, received her second cochlear implant.

Images of their matching “implants” drew widespread attention from as far afield as France and Germany when they went viral on social media in August.

Now, Mr Campbell has a second tattoo above his right ear to match the cochlear implant of his older son, Lewis, 9.

“I wanted to show him love and support in his journey.”

Mr Campbell said Lewis was “pretty rapt” with the tattoo.

“He loves Charlotte’s one and was always tracing it.”

Lewis had until recently been using hearing aids, but Mr Campbell said that one morning four weeks ago, he woke up and complained they weren’t working.

A trip to the audiologist found he had lost virtually all hearing in his left ear and some in his right ear.

Mr Campbell said it was tough for his son, who went a “little reclusive” after he lost more of his hearing.

“He just said to Anita [Lewis’ mum] that his ear was dead. He just said, ‘I want my ear to be alive again’.”

Lewis has a condition called enlarged vestibular aqueduct, which is commonly associated with hearing loss that can be sudden and progressive.

His sister Charlotte, cousin and grandmother all have the same condition.

Because the genetic link to the disease is not well understood, a genetic team from the United States is testing the family.

Mr Campbell said it would take a couple of years for the results to be available.

Lewis received his implant on March 23 and got “switched on Wednesday this week”.

Mr Campbell said his son appeared to be adjusting well.

“But it’s different; natural hearing is different to cochlear hearing,” Mr Campbell said. “But he said music sounds good and we sound normal.”

He said Charlotte had adjusted to her implants. “But she’s cool. She doesn’t let anything hold her back.”

dad’s tatts lend an ear to his kids 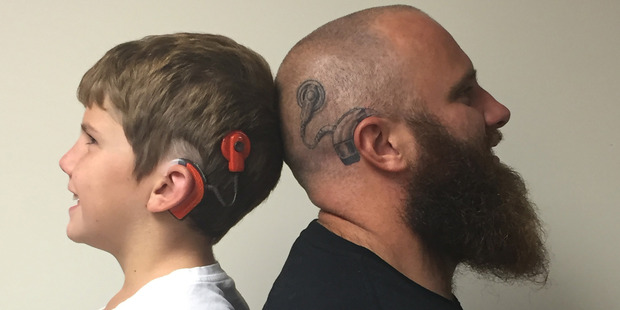