A dream is a wish your heart makes … when you’re dancing! On Monday, April 11, Dancing With the Stars upped the ante with its beloved Disney night. Performing to famous Disney movie songs, the celebrities did their best to add some storybook magic to the show. Zendaya was on-hand to serve as a guest judge, but mainly she just did what most guest judges do and told everyone they were great (no disrespect). The evening was full of enchantment, but for one couple, the fairy tale came to an end.

PHOTOS: ‘Dancing With the Stars’ Season 22 Cast: See the Celebs and Their Partners in Costume!

Okay, so Marla Maples wasn’t fired, but she and her partner, Tony Dovolani, were eliminated. (They did get to perform a beautiful waltz to “Part of Your World” from The Little Mermaid before hearing the bad news, at least.) It came as quite a shock, since they were far from the bottom of the leaderboard last week, and perhaps no one was more shocked than Tony. For her part, Marla was her usual gracious self.

“It’s been the most incredible experience,” she said. “Tony has been the most masterful teacher. We have had so much fun.” At least Marla’s daughter, Tiffany Trump, was in the crowd to see her mother’s final spin in the ballroom.

PHOTOS: Dancing With the Stars Winners Through the Years: Mirrorball Champs From 2005 to Now

The Gloves Come Off Between Paige and Ginger

The bubbly Paige VanZant and her partner, Mark Ballas, gave the final performance of the night — and basically blew everyone else out of the water. They did a quickstep to Toy Story‘s “You’ve Got a Friend in Me,” and Paige reflected on how happy she was to finally have friends outside of the UFC.

Because she’s insanely fit, Paige proved to be the first celebrity of the season who wasn’t completely overrun by the quickstep, which is no doubt one of the most physically challenging dances out there. Bruno Tonioli loved that Paige made it “saucy in the middle” and described the routine as “refreshingly wonderful.” Carrie Ann Inaba said it was the “most difficult” dance of the night and noted that Paige’s athleticism carried her through nicely. For their upbeat, just-sexy-enough performance, Paige and Mark landed at the top of the leaderboard with a 36 out of 40.

But she wasn’t the only one fighting for top prize! Meteorologist Ginger Zee and Val Chmerkovskiy also hit an impressive 36 with their Beauty and the Beast-themed foxtrot. Ginger was psyched because she relates to Belle’s “quirky” side, and her joy came through in her dancing. Len Goodman declared it the “best dance this season,” much to the couple’s delight.

Last week, all three football players found themselves in a tie for last place, but this week, one of them moved up — a lot. Antonio Brown and Sharna Burgess wowed the judges with their Aladdin-inspired jazz routine, in which Antonio played the “2016 pimp version of Aladdin,” according to Sharna. Bruno said Antonio “could have been a Rockette” because his kicks were so good, and they nabbed a 35.

Also clocking in with a 35 were Wayna Morris and Lindsay Arnold, who performed a spirited samba to The Lion King. Carrie Ann thought the Boyz II Men crooner “over-danced it a little at the beginning,” but Bruno thought he “killed it.” (Wayna agreed with Carrie Ann’s assessment, but it seemed no one else in the audience did based on the barrage of boos.) During his video package Wayna made it clear he wanted to get himself back on top of the rankings, but he missed his goal by one point.

Rounding out the top of the pack were Nyle DiMarco and Peta Murgatroyd, who performed a Tarzan-themed samba. Nyle began the routine with a backflip and left most of his clothes at home. He probably could have just stood there in his loincloth and still impressed everyone in the ballroom — but he danced, and he danced well. Bruno said, “The lord of the jungle is now the lord of the dance,” and Carrie Ann said he was “the happiest place on Earth” (agreed). Len thought there was too much bongo drum playing, but host Tom Bergeron pointed out that even the bongo drum playing was pretty impressive considering Nyle can’t hear anything.

In her video, Jodie Sweetin reflected on how emotional her dance was last week and how now she was determined to have fun. She didn’t have much fun, though, because her routine with Keo Motsepe was a hot mess. Carrie Ann called the cha-cha-cha “underwhelming” and even went so far as to ask Jodie what happened. Jodie said she couldn’t hear the music because her fans were screaming too loudly. No comment. Bruno said she covered the mistakes to the best of her ability (which wasn’t very well), but Zendaya praised her for pushing forward despite the errors.

Dancing with The Stars cast of Season 22. Adam Taylor/ABC via Getty Images

Even with all of those missteps, however, Jodie’s 27 still put her ahead of Doug Flutie and Karina Smirnoff, who preformed a well-intended but somewhat awkward Mary Poppins routine complete with canes and tiny umbrellas. Carrie Ann said she saw “the makings of a good routine,” but lamented that it didn’t materialize. Len and Bruno agreed the pair was out of sync with both each other and the music a couple of times. They ended up in last place with a 24.

The remaining two pairs—which included Von Miller and Witney Carson (who had Cinderella) along with Kim Fields and Sasha Farber (who had The Jungle Book) — showed improvement from last week, but not enough to make much of a lasting impression. They’ll have to up their game if they want to compete in the big leagues.

Murgatroyd and DiMarco on Dancing with The Stars. Adam Taylor/ABC via Getty Images

Tell Us: Do you think Marla Maples deserved to go home?

Dancing With the Stars airs on ABC Mondays at 8 p.m. ET.

Can’t get enough of Us? Sign up now for the Us Weekly newsletter packed with the latest celeb news, hot pics and more!


‘Dancing With the Stars’ Recap: Nyle DiMarco Gets Shirtless — and a Surprising Contestant Goes … 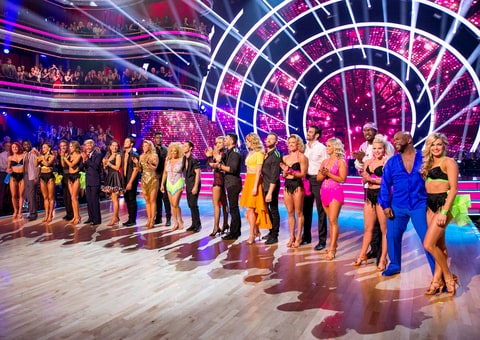