'Dancing With The Stars' Val Explodes At Peta Backstage, Claims She Is Growing 'Emotionally …

The backstage drama has reached new heights as Dancing With the Stars continues its 22nd season. The contestants are set to switch partners for the upcoming week, and things are already heating up between Peta Murgatroyd and her fiancé’s brother, Val Chmerkovskiy. In the latest backstage outburst, Val accused Peta of getting a little too close to her dancing partner, Nyle DiMarco.

Peta Murgatroyd and DiMarco [Image via ABC]An inside source told Radar Online that the outburst between the two stars happened over jealously. Apparently, Val told his older brother, Maks Chmerkovskiy, that Peta and DiMarco were starting to bond and that something might be going on behind-the-scenes.

“Peta and her fiancé’s younger brother Val had it out because he told Maksim that Peta was getting too emotionally attached to Nyle… There is so much drama right now because Peta is constantly fighting with her castmates because it seems like they are all out to get Nyle.”

That being said, Us Magazine is reporting that there is no conflict between Nyle and Maks. In fact, Peta attempted to clear up the matter by revealing that Maks is fully supportive of her partner and their bid to win it all.

“No, no, Maks adores him. And we all have a lot of fun together,” she stated. “They look so similar it’s kind of funny! They could be brothers!”

Of course, Peta claiming Maks “adores” Nyle hasn’t stopped rumors of jealousy. After all, Peta and her partner have gotten to know each other very well over the past few weeks in the competition. Even still, Peta assured fans that she keeps things strictly professional.

Peta and Maks dated back in 2012 before deciding to part ways a year later. However, the two rekindled their romance in 2015, and Maks popped the big question last fall. At this time, it is unknown when the two plan on officially exchanging vows.

Val Chmerkovskiy [Photo by Sergi Alexander/Getty Images]Although Maks is no longer an acting dance partner on Dancing With the Stars, Yahoo is reporting that he is set to make a return this week as a special guest judge. Not only does this mean Maks will dive headfirst into the drama between his brother and Peta, but he’ll also be judging the pair as they take their chances on the dance floor with their respective partners.

“For whatever reason, they let me back in the ballroom. So next week I’ll be sitting behind the desk next to Len [Goodman] and they’ll be two of us dishing out criticism at everybody,” Maks shared during an appearance on Good Morning America.

Despite his close relationship with Val and Peta, Maks does not think that his judgement will be slanted. Fortunately, both Val and Peta have strung together some really good performances as of late, which should make Maks’ job a little easier.

“We share a household for the time being but, you know, it’s funny because they go to their jobs. I do my thing. We don’t really talk about these things,” Maks revealed. “When they ask me a question and want advice, I certainly give it but I kind of, like, stay in back.”

That being said, Maks added that they don’t always take his advice. In fact, Val and Peta sometimes view his comments as a little outdated, especially considering how much the show has changed over the years.

Peta and Maks [Photo by Sergi Alexander/Getty Images]Of course, that will all change next week when Maks takes a seat at the judge’s table. Whether or not his relationship with Val and Peta will affect his critique is yet to be seen.

Dancing With the Stars continues Monday nights on ABC.

Tell us! Do you think Peta and Nyle’s relationship on Dancing With the Stars is a little too close for comfort? Let us know in the comments below.


‘Dancing With The Stars’ Val Explodes At Peta Backstage, Claims She Is Growing ‘Emotionally … 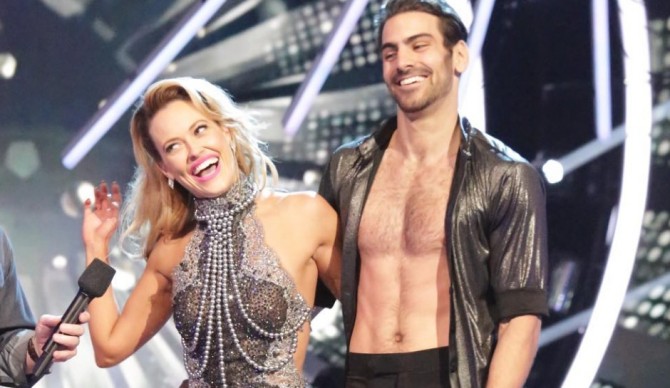