“Dancing with the Stars” on Monday night will feature emotional performances from many of the stars celebrating their Most Important Year, but where do they stand going into this show? That’s what we are here to point out in our latest contestant rankings!

As always, we’re basing these rankings on scores, edit, and perceived audience size.

11. Mischa Barton – Mischa stays fairly level to where she was last week, but the big different here is that last week, Geraldo Rivera was still around. Our concern isn’t so much that “The OC” star isn’t a great dancer; instead, it’s that she doesn’t seem to be enjoying this very much.

10. Marla Maples – In terms of scores, Marla really didn’t do too terrible. However, we don’t really get the sense that she is a huge hit at the moment with viewers. We just don’t see her getting a whole lot of votes.

9. Kim Fields – It was a little bit of a stumble this past week for Kim, who was one of the biggest surprises of the first week. Isn’t this the time to step things up? We certainly think so!

8. Antonio Brown – Maybe we’re ranking Antonio too low given Steeler Nation and their enthusiasm, but we don’t think that he’s getting a really great edit on the show relative to his scores. Cockiness is not a great trait for the “Dancing with the Stars” contestant.

7. Doug Flutie – Talk about a comeback! While Flutie has been far from perfect so far this season, he vastly improved on his first performance on this past episode, and we do think that people think of him fondly from his NFL days.

6. Jodie Sweetin – She’s been solid for two weeks, and she has the whole “Facts of Life” support base behind her. For the time being, doesn’t that mean something?

5. Ginger Zee – A weaker second outing means that, at least for now, she’s one of the more unpredictable contestants this season. With all of her traveling, our biggest fear here is exhaustion as we progress further into the season.

4. Von Miller – Von’s scores have been fairly similar to Antonio, but we think that out of all the NFL players on the show he’s the most well-known. Also, he’s come across fairly well on the show, and has a good rapport with Witney Carson.

3. Nyle DiMarco – We’re not going to fault Nyle too much for a weaker outing in his second week, mostly because we still feel like the majority of America probably does love him and his story. We just have to figure out now if week 1 was a fluke.

2. Paige VanSant – Her week 2 outing was more indicative of the kind of dancer she’s going to be all season long, and what’s going to be fairly interesting to watch this season is whether or not she can get voters on her side while being an obvious frontrunner. It worked for Nicole Scherzinger…

1. Wanya Morris – Two weeks in, and two really great performances. We were slightly worried about him not being a household name going into this, but he’s making up for that on the basis of just being great entertainment. 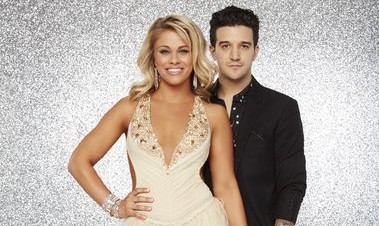