This season of “Dancing with the Stars” is a fairly interesting beast so far. Last season, it felt like we really only had Nick Carter, Bindi Irwin in the lead, and then everyone else battling for some sort of remote relevance on the show. This time around, we do have a number of contenders … though we’d still say that there is one favorite right now head and shoulders above the rest.

New to the rankings? Then, first and foremost, welcome! Also, know that we based these on a number of different things, including performance quality, edit, and voting history near the top of the list.

10. Marla Maples and Tony Dovolani (last week: 10) – We’re probably being a little tough on Marla, but the sentiment seems to be that she’s one of the least-known stars of the season. The first two eliminations this season (Geraldo Rivera and Mischa Barton) were obvious, and we feel like this one is a little more muddled. The lowest-scored Star does not always go home.

9. Doug Flutie and Karina Smirnoff (7) – We gave Doug the benefit of the doubt last week over a comeback performance; however, he couldn’t improve his scores, and he also performed early in the show. That never bodes well when it comes to being memorable. The only reason he’s not in last here is because of his football icon status, which has helped many a Star in the past.

8. Kim Fields and Sasha Farber (9) – We’re probably going to get some flack for this one, given that Kim got a lot of audience praise for this past performance. The issue is that when looking at the history of NFL stars on this show, we just can’t justify putting either Antonio Brown or Von Miller this low when they probably have big support bases backing them up.

7. Antonio Brown and Sharna Burgess (8) – Two things probably help Antonio going into the upcoming results: He had a much more likable edit, and he also had his kid make a cameo in the routine. Cute kids always help! With this said, his scores are a little disappointing given the pedigree of wide receivers on this show.

6. Ginger Zee and Val Chmerkovskiy (5) – Ginger is an interesting case study here on the show. She hasn’t really done anything terrible or wrong, but we still feel like she blends into the background. Sure, we know that the “Good Morning America” synergy helps her, but by how much? How many people love the meteorologist on the nationally-broadcast morning show enough to vote for her?

5. Von Miller and Witney Carson (4) – Like Antonio, Von’s been a letdown when it comes to his scores, and we expect something better from a reigning Super Bowl MVP who is impossibly athletic. Yet, at the same time we’re not going to believe anyone who says that this guy has a tiny pool of fans voting for him. They’re going to give him a lot of leeway to improve this season.

4. Jodie Sweetin and Keo Motsepe (6) – What Jodie has going for her right now goes beyond her “Fuller House” star power and nostalgia; she’s also doing a good job taking advantage of her airtime to relate to viewers and showing her vulnerability and her history. People will admire her sense of openness and her comeback story.

3. Paige VanSant and Mark Ballas (2) – Good luck convincing us that Paige is not the best dancer this season. Technically, she’s sound and probably will draw high scores up to the finale. Her challenge is going to be finding a way to reach people outside of the MMA community, and overcoming the ringer status she was christened with by superfans preseason due to her dance history.

2. Wanya Morris and Lindsay Arnold (1) – Wanya is an interesting study in his own right, given that we’re talking about a guy here who is not necessarily a big name on his own, but associated with one in Boyz II Men. So far, name recognition doesn’t seem to be an issue, and he comes across as a super-talented, super-likable guy on TV. He’ll be around until at least close to the finale.

1. Nyle DiMarco and Peta Murgatroyd (3) – He got the first 9 of the season last week, he’s an inspirational story, and despite his obstacles seems to be a very talented dancer. While we’ve seen many other inspirational dancers be topped in the past (see Noah Galloway), Nyle has J.R. Martinez upside in that he’s not just a good dancer. He’s a great one.

Who is your favorite at present? Vote below, and head over here to see our “Dancing with the Stars” spoilers for tonight’s episode! Also, sign up over here to get some other TV news on everything we cover, sent right over to you via our CarterMatt Newsletter. (Photo: ABC.) 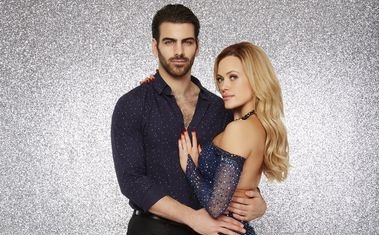