Man gets cochlear implant tattoos to support his children

Alistair Campbell tickles his son Lewis, showing the cochlear implant tattoo he had done to support him.

Alistair Campbell strives to be a fair father. Six months after getting the image of a cochlear implant tattooed to his head to support his hearing impaired daughter, the Taupo dad has had a second tattoo done to support his son Lewis.

Campbell said Lewis woke up four weeks ago and had lost all hearing in his left ear.

The nine year old soon travelled to Gillies Hospital in Auckland for a two and a half hour operation to have a cochlear implant inserted – returning his ability to hear.

The cochlear implant tattoos were “a tribute to the kids for what they’re going through”, Campbell said.

“I’ve done it for Charlotte so I just thought I would be fair and do the same for Lewis – he’s been through a lot.”

Campbell said Lewis would need to visit the Auckland hospital 12 times in the next year for slight adjustments to his hearing aid.

“At each visit, they turn it up just a little bit so it’s slightly louder and he can adjust to that.”

Lewis was enjoying having his hearing returned, Campbell said.

“He loves music. He’s singing a little bit more in the car now.”

Lewis agreed, and listed his favourite songs – “History” by 1D and “Rock the Blues Away” by ACDC.

Campbell said he expected a good year for Lewis, who enjoyed playing soccer and had won a 400 metre sprint race at Hilltop School.

There’s magic around the corner at Hamilton’s mosaic house

Man gets cochlear implant tattoos to support his children 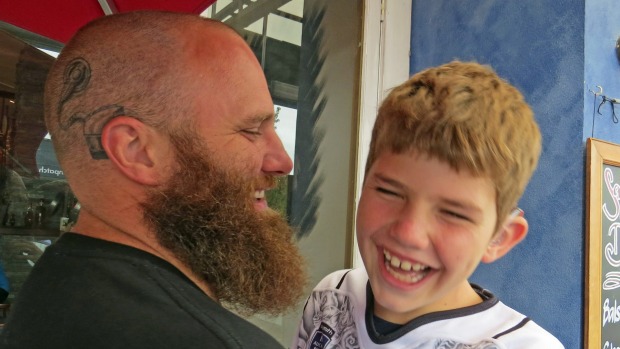