Urban shares her story about her journey with Zoe

What is it like to be a 17- year-old girl, a senior in high school about to graduate, and be pregnant?

And, what is it like trying to decide what to do and make some life-altering decisions? Should you have an abortion, keep the baby, or give it up for adoption?

And, what if you decide to give the baby up for adoption and due to circumstances beyond your control, you have to sign away your parental rights three times in seven months?

Jess Urban and Abby Zoe Urban are pictured above with Celine Zoe Rarus.

And, what if your baby is quickly going deaf and the adopting parents “give it back” because of that?

What is that like? Blue Earth resident Jessica (Zimmerling) Urban knows what all that is like just all too well.

And now, her story is part of a new book about the whole saga, written by the woman who adopted Urban’s baby the second time around.

Titled “Finding Zoe A Deaf Woman’s Story of Identity, Love, and Adoption,” it is written by Brandi Rarus and has a foreword by famous deaf actress Marlee Matlin.

Urban plans on selling copies of the book at her garage sale at her home at 214 S. Circle Drive in Blue Earth this weekend. The books cost $22.

“The first part of the book is about Brandi’s life and family,” Urban explains. “The middle part is all about my life and having Zoe. Then the last part is about our lives intertwining.”

That’s right. It was an open adoption and Urban keeps in contact with her birth daughter, Zoe, who lives in Texas. In fact, Zoe, now 12, was in Urban’s wedding at Trinity Lutheran Church in Blue Earth in 2012 as a junior attendant.

But, there is much more to the story. Zoe is deaf. So are her adoptive parents, Tim and Brandi. However, their other three children, all boys, are not deaf.

Urban calls it a miracle that her daughter ended up just where God intended her to be. Here is Urban’s story about how it all happened.

She was from Northrup and a senior at Fairmont High School when she became pregnant.

“I really didn’t know what to do,” Urban says. “These were very difficult decisions to make for a 17-year-old. And my parents had divorced when I was six, so I lived with my dad. My parents differed in their advice on what to do.”

She said she agonized over the situation and then went to Options Pregnancy Center in Mankato. They were very helpful, she says.

“I finally decided adoption was the thing I?wanted to do,” she says. “So I went to the New Horizons Adoption Center, which at the time was in Frost (before they moved to Blue Earth).”

“She was so caring, so helpful,” Urban says. “I wouldn’t have made it (through all of this) without her.”

Urban had an unnamed baby girl born on March 22, 2004. But eventually, the 5 pound, 15 ounce little girl would have plenty of names.

“I liked the name Emma, the baby’s father liked the name Grace, but the adopting parents wanted to name her Celine,” Urban explains. And, eventually, her name changed to Zoe. “Her official name now is Celine Zoe Grace Rarus but everyone just calls her Zoe.”

After Zoe was born, she went into foster care when she left the hospital.

That is when the birth father registered his paternity rights and a legal battle ensued. Zoe stayed in foster care for six more weeks, with Urban visiting her two to three times a week.

After 29 days, Urban was at her job as a manager at the McDonald’s in Fairmont when she was served with custody papers filed by the biological father.

“I had to go home, I was so mad,” she says. “He was trying to force me to be a parent. I?had a choice of having Zoe in my home or letting her go to his home.”

She chose her home and brought Zoe home from foster care. She had to go to garage sales and find a car seat and a crib and baby items, as she was unprepared to have a baby live with her.

Months went by. At Zoe’s two-month checkup, an audiologist checked her hearing.

But, it was. Zoe’s one ear had severe hearing loss and her other ear was moderate to severe loss. And they could not tell if it would get worse or get better. Eventually, though, it would get a lot worse.

After a few more weeks, Zoe’s biological father signed off on his paternity rights.

“He saw it wasn’t fair for Zoe to grow up in a single parent home and that his attitude was holding her back,” Urban says. “He realized she needed a better home.”

But, by then, Urban herself was not sure. She had been growing attached to her baby.

“I asked myself, do I want to give her up,” she recalls, adding that it seems like a lifetime ago that she had to decide. “I didn’t know what I was doing, I was in such limbo.”

In the end, she decided to do what she thought was best for the baby, and, for the second time, signed away her parental rights.

“I knew I?couldn’t provide for her the way she was going to need to be, even with help from my parents,” she explains. “I had come from a single parent home. And I didn’t want that for her, either.”

So, Zoe, now renamed Celine, went to live with a family that Urban had chosen from a long list of possibilities. It was a couple who already had one son.

“I got weekly updates,” Urban says. “And, they had gotten hearing aids for her.”

Then one day Urban received a shocking call from Marlys Ubben at New Horizons Adoption Agency.

“They said the family had decided that they were unable to care for Celine (Zoe),” Urban recalls. “They said she would be totally deaf and they would not have the tools to help her.”

They were giving her back and Zoe was going back into foster care.

“I was mad for a long, long time,” Urban says. “I just did not understand it. Maybe now I understand it better, but I still can’t accept it.”

However, Urban now sees these first adoptive parents as a “stepping stone” in God’s plan for Zoe.

“Once again I?was forced to make a decision, the same decision,” she says. “Do I want her to live with me, or do I pick another family? I prayed, ‘Lord, what do you want me to do?'”

But, this time it felt right. Really right.

“I looked at the applications of families wanting to adopt, and there it was,” she says. “This family, Tim and Brandi Rarus, who were living in Sioux Falls. I think I knew immediately that they were the ones.”

Both Tim and Brandi were deaf. Tim had been born deaf, part of a family who had deafness in their history for 125 years. Brandi had lost her hearing at the age of six.

The couple were long-time advocates for the rights of deaf people. Brandi had been Miss Deaf America.

They had three boys and Brandi ached to have a girl in their family. So much so that the couple was about to adopt a girl from China.

But, her husband, Tim, was hesitant to take the final step at the last minute, so that adoption was put on hold.

Then Brandi heard about Zoe from the New Horizons adoption Center in Sioux Falls.

She, too, felt almost immediately that Zoe was meant to be her daughter. And, she feels it was God’s intervention through her husband Tim’s being hesitant that pointed them to the right choice.

Both women agree that this, the adoption of Zoe, was meant to be. And both women have become close friends closer than friends, more like family.

Now Rarus’s book, “Finding Zoe,” has them tied together forever.

“It is our story, told from both sides of the adoption process,” Urban says. “It really is a heckuva story.”

The two women have been speakers at various adoption events, including a retreat in Colorado and at the New Horizons Adoption Center birth parent retreat last fall.

“We partner together to tell our story, and we would like to tell it all over,” Urban says. “I have a Facebook page, too, called Jess Urban Birth Mom. It helps others struggling with adoption questions.”

Urban moved on with her life after the adoption. She graduated from college in Winona and took a job at St. Luke’s Lutheran Care Center and moved to Blue Earth. She worked there six years, but now works at Weightronics in Fairmont.

She married Jerrick Urban in 2012. He was from Truman and the two grew up very near each other but did not actually know each other, until mutual friends introduced them in 2008.

“Her name is Adalynn Zoe Urban,” she says. “We call her Addy. And Addy thinks it is really cool that her middle name is the same as her “sister” down in Texas. Addy idolizes Zoe. And vice versa.”

Sometimes, Urban says, God has a plan for us, and we just have to trust Him to show us what it is.

And, sometimes, the third time is the charm.


Urban shares her story about her journey with Zoe 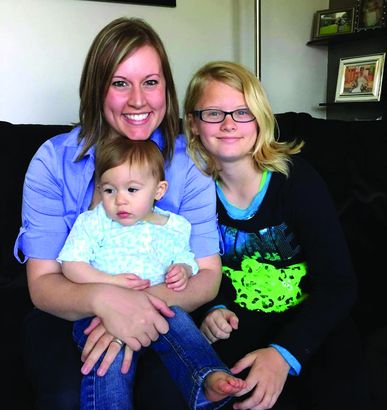