When Laura Heywood asked AMERICAN PSYCHO composer/lyricist Duncan Sheik if there would be an original Broadway cast recording of the show, which presently has just a London cast recording, his answer was perhaps a bit unexpected.

“I shouldn’t give this away but we may be filming the show, in which case we would get kind of a soundtrack out of that,” Sheik replied in a video interview for AOL BUILD.

That was all to be said on that subject, but the Tony-winner was more talkative about a possible movie version of his first Broadway hit, SPRING AWAKENING.

“We have some wonderful producers. Tom Hanks‘ company Playtone has been helping to shepherd it along. We just need to find the right ingredients and really, the director, at this point.”

“We’re patient. We’re waiting for the right person to come along and have the right vision for the movie because for me personally there are very few musical movies that stand up over the test of time. There’s CABARET and DANCER IN THE DARK and THE SOUND OF MUSIC and I start running out after that.” (He later praised Baz Luhrmann as a director of film musicals.)

“I just want to make sure it’s a really beautiful artfully done musical movie. We really want an auteur director to come in and help us make that film.”

When asked if the film might contain aspects of this season’s Deaf West Theatre‘s Broadway revival of SPRING AWAKENING, where deaf actors shared roles with hearing actors and words were signed as well as spoken and sung, he replied, “There could be a version of the movie that used that aspect and that choreography. It was so powerful. But I’m not the director so it’s really not my department.”

The full interview can be enjoyed below.

Following a highly acclaimed, sold-out London run, American Psycho brings its designer brand of style, sex, and synthesizers to Broadway. Set in the excess of 1980s Manhattan, American Psycho tells the story of Patrick Bateman, a young and handsome Wall Street banker who pursues his darkest American dreams. Patrick and his elite group of friends spend their days in exclusive restaurants, hot clubs, and luxury labels. But at night, Patrick takes part in a more sinful indulgence, and his mask of sanity is starting to slip… 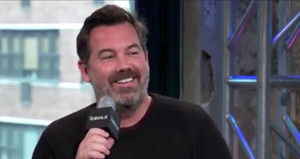