This is a story about a martial artist, a truck driver, a photographer, a scuba diver, and a man and his dog. It’s a story about not letting anything hold you back.

You wouldn’t pick that Jason Irvine has a hearing disability. There’s no cochlear implant, there’s no hearing aids and there’s no other nod to the fact that he’s profoundly deaf. “I can’t hear anything,” says Jason.

He speaks perfectly and he can read lips, so he has little trouble communicating with non-sign language speakers.

Jason says he’s deaf as a result of head injuries as a child. He began to lose his hearing in primary school and it continually degenerated with time. But Jason’s hearing has never held him back.

The 42-year-old has done martial arts, scuba diving, photography, lighting at church, and he has his driver licences in class 1-5 vehicles.

He says it’s difficult to get a job because employers sometimes think it’s dangerous.

Jason’s next ambition is a little different.

“I would like to do something that’s never been done yet, I’d like to be on The Bachelor.”

Jason knows The Bachelor has been done, but not with a deaf man.

He says he’s tried looking for his special someone before, but communicating can get in the way.

“I do encourage [people who can hear] to sign because there are many deaf people like me who would love to chat to hearing people.”

For now, he’s got Olive.

Olive, his black toy poodle hearing dog, knows that when her yellow coat is on it’s business time.

“She lets me know when there is a sound I can’t hear like a doorbell, a cell phone, an alarm, or a phone call.”

His bond with Olive is strong because he relies on her to be his ears.

The hospital has offered Jason cochlear implants but he’s turned them down.

“I don’t want it. I’m so comfortable being deaf that it doesn’t matter.” 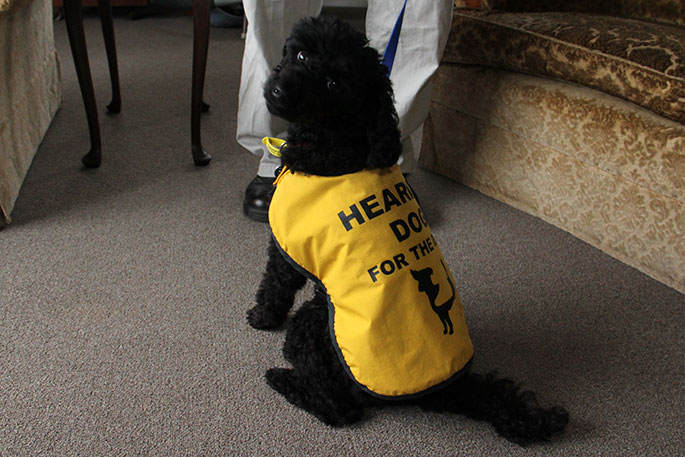