The founders of The Venue Collective, the booking agency behind some of Australia’s most popular mid-sized venues, have announced they will be dissolving the business. Formed in 2014, the agency provided centralised booking for nine live music venues.

In an email sent to various Australian bookers and acquired by Tone Deaf, founder Ben Thompson blamed the challenges inherent in “a centralised office programming and promoting interstate venues” amid an increasingly troubled live music climate.

Speaking to Tone Deaf, Thompson said he and the other members of The Venue Collective had come to the decision to dissolve the company over the past week and cited a number of factors, including the fall of the Aussie dollar, as influencing the decision.

“It’s something that we’ve been look at for the last week or so and to be honest, it’s a combination of reasons that we’ve decided to wind down the business,” he said. “I think one of those reasons is I think we were quite ambitious with the model of booking nine venues around Australia from a centralised office.”

“There’s a lot of challenges that come with that and we’ve definitely seen a downturn in mid-sized international tours. I don’t think there’d be any venue operator out there — who relies on those types of tours — that would say they’re absolutely killing it.”

“I think everybody is aware of that. We’ve lost a heap of big festivals, therefore we’ve lost a heap of international acts touring the country. The Aussie dollar’s dipped down below 70 cents and I think there’s a few factors of why that mid-sized touring’s been a bit slower, but to be honest that’s not the be all and end all of the business. It’s not going broke and it’s not in any kind of bad way.”

When The Venue Collective first formed, Thompson told Tone Deaf, the Australian live music industry had just seen two of its strongest years, propelled by a glut of major festivals such as Big Day Out and Soundwave, both of which have since collapsed.

“We have lost some festivals and it’s going to take time for things to realign after that. I think things will definitely come back and it’s looking like we’ll have three big touring festivals in the country next year and hopefully there’ll be a sideshow boom and that’ll really help stimulate things,” he said.

“The team of staff that I’ve had at The Venue Collective have all come from several years working in different booking entities and venues around Melbourne and they’re the most amazing team of creative people and I’m doing everything I can to assist in them perhaps assimilating into positions at some of the Venue Collective venues. Nothing is set in stone at this point.”

“I will be continuing to work as a booker for 170 Russell in the city, which is a venue that I’ve been extremely proud of over the last couple of years. It’s certainly come leaps and bounds in the last few years. But we’re very committed to running the office in the coming weeks and months until there’s been a complete and thorough handover.”

“It’s really important that all the promoters and agents that have shows and all the acts coming to play and all the venues don’t see anything change as far as the Venue Collective’s service and that’s my priority for the next few months.”

The formation of The Venue Collective was an unprecedented and ambitious venture and the demise of the company will no doubt change the Australian live music landscape. 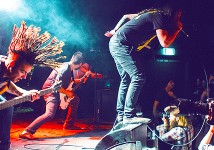