THEY’RE older than Celtic, Rangers, Partick Thistle and even the Scottish Football Association .

But while most fans won’t know of the Glasgow Deaf Athletic Football Club, they are one of Scotland’s most important sporting institutions and have been a shining light for the deaf community for 145 years.

The team are celebrating their incredible history – the oldest surviving deaf football club in the world and the only one left in Scotland – with special events this weekend.

General secretary Jack Speirs, 22, is the man behind the celebrations being held at Ibrox , and is determined that the club continue to thrive.

He said: “The club are very important for the deaf community as a real place of social interaction.

“The football means we can come together, get encouragement and get involved in sport.

“It’s quite a big responsibility trying to run and organise different events and it’s a massive history and legacy that has been passed on.”

The origins of GDAFC stretch back to the early days of grassroots football in Scotland.

Teachers and pupils at Langside School for the Deaf watched bemused in 1867 as local sportsmen started kicking a ball around, with jackets for goalposts, becoming Scotland’s first football club Queen’s Park.

Inspired by their neighbours, a group of men including William Agnew and Alexander McGregor founded the Glasgow Deaf and Dumb Football Club in 1871.

They were always looking for new teams to play and would venture to England for matches.

Inspired by the Glasgow side’s success, similar clubs and groups were created at deaf schools and societies all across the UK.

In 1899, Glasgow played Edinburgh Swifts for the first Scottish Deaf Cup. It was played in front of 2000 fans in Falkirk and Edinburgh won 4-0.

Jack Speirs showing off his skills

Some of the club’s greatest players helped steer the Great Britain team to football gold in the deaf Olympics in 1928 and 1935, and down the decades generations of footballers have been part of an incredible success story.

The elder statesman of the club is retired engraver Sandy Brooks.

He joined as a right winger, aged 19, and became club secretary, a post he held for 30 years before becoming honorary president.

While ill health keeps him from attending games every week, Sandy, 81, will today watch deaf teams from across the UK compete in a friendly tournament at Ibrox, followed by a celebration dinner.

He said: “I first went along to the club when I was 19 and it’s been part of my life ever since.

“I loved it. I was so happy working with the club. There was a lot involved in setting up matches, a lot of organising and a lot of letter-writing.

“We’ve played European games and travelled to play in places such as Taiwan. It’s always been a fantastic club to be part of.

“There used to be eight clubs in Scotland and we are the only ones left. I am proud of how the club has lasted so long. It’s always been like my baby.”

Sandy is delighted that the club are still going strong under the leadership of Jack, whose dad Alan and uncle Craig have also played for and run the club.

Shop worker Jack said: “I have grown up with the club. My dad and uncle played so it has always been in my life.

“My dad met my mum when he came up from Kilmarnock for a game and it’s always been very important for all of us.

“It’s a lot to manage the finances and all the different sides of the club – a big responsibility. ”

They are also keen to set up sister clubs across Scotland.

Jack said: “We had a lot of deaf schools in Glasgow but a lot are being closed. People are forced to go to
mainstream schools so that is a little bit of our identity disappearing.

“The first time I went to organise something in Aberdeen, it was very difficult. But they have started a deaf youth club there and deaf children can come along and see what it’s like and we can take things from there.”

The club, based at Glasgow Green, are on good form after narrowly losing out to Fulham in the final of the British Deaf Cup earlier this month.

GDAFC play tournaments, cups and friendlies against other deaf teams but play in a hearing league every week. That’s not without its difficulties.

Jack said: “The SFA are trying to make things more even by using flags as obviously a whistle doesn’t work for us. We have a captain who can interpret and speak to the referee and to players if anyone needs to calm down a bit.

“But a few months ago we had a problem as a referee wouldn’t use the flag, which made it more stressful for us. We lost the game.

“It was quite awful that he wouldn’t use the flag. That sometimes happens and we have to deal with it.”

Jack is a big believer in fighting prejudice and organises Sense Over Sectarianism charity matches to help raise awareness.

He said: “We sometimes face discrimination from other teams, not often. That is why we promote Sense over Sectarianism events. We want friendly games and peaceful places.

“People do make cruel comments. Things like that happen from time to time.”

The mission for Jack is to build on the last 145 years and make sure there is a future for deaf football across Scotland.

He is taking the team to Greece next summer for a tournament and is helping to stage an international
championships in Glasgow in two years’ time.

It’s a constant challenge to raise money to add to the backing they have had from the Big Lottery Fund.

Jack said: “We are always looking for funding and would love to hear from anyone who can help with that. I’d also like to see us get more games.

“We have started up a youth side and hopefully that will keep growing and we can keep things going.

“It’s a fantastic club to be involved with and it’s a real privilege to be part of something with such a massive history.”

The Glasgow Deaf Athletic Football Club 145th anniversary tournament kicks off today at Ibrox at 10am. 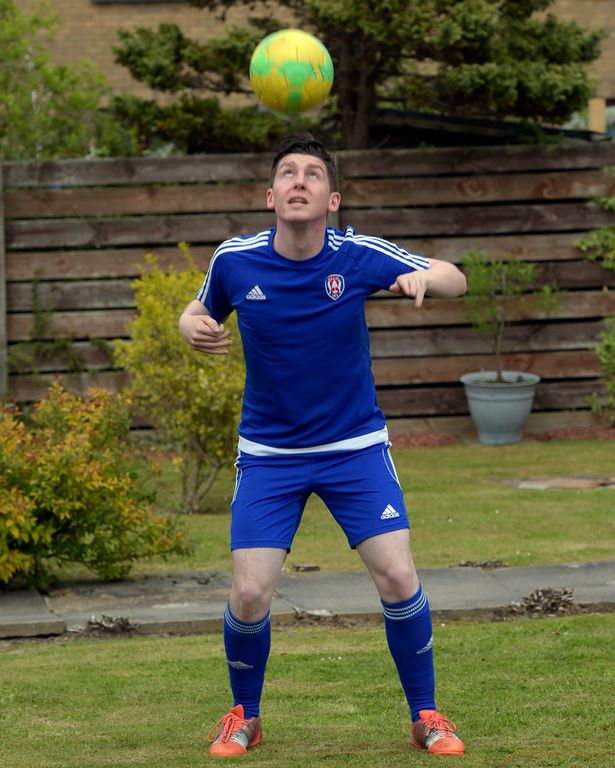