Oscar-winning actress Marlee Matlin said the best thing to do for people “who have special needs is to communicate with them.”

Oscar-winning actress Marlee Matlin said the best thing to do for people “who have special needs is to communicate with them.”

Marlee Matlin and actor Henry Winkler, a longtime friend and mentor, at the Walk of Fame Ceremony honoring Matlin in Hollywood, May 6, 2009; both were interviewed for the book Mazel Tov: Celebrities’ Bar and Bat Mitzvah Memories.

For Marlee Matlin, being deaf was not the most difficult challenge she faced on her way to becoming an Oscar-winning actress.

“The most difficult thing to overcome was not within me but within the attitudes and barriers that people put up,” Matlin told NJJN via e-mail. “As I say in my presentations, the real ‘handicap’ of being deaf does not lie in the ear; it lies in the mind. Once you realize that, deaf or not, anything is possible.”

Matlin will be guest speaker at the Main Event luncheon of the Women’s Philanthropy of Jewish Federation in the Heart of New Jersey. The event, on Sunday, May 22, at Ocean Place Resort and Spa in Long Branch, will also honor the Friendship Circle, Hand in Hand, and Yachad, organizations that assist individuals with special needs and their families.

Matlin said she will talk about “Healing the World One Person at a Time,” a topic inspired by the Jewish Federations of North America’s Living Generously fund-raising campaign.

Her focus, she said, would be “about how my Jewish upbringing helped shape and guide my life, helping me to overcome barriers to achieve success.”

Becoming bat mitzva, Matlin said, played “a big part” in her journey to that success. She read her Torah portion by learning Hebrew phonetically and was later interviewed for the book Mazel Tov: Celebrities’ Bar and Bat Mitzvah Memories.

She declined to elaborate on the role the religious rite of passage played in her life, preferring to save it for the program.

“I love the opportunity to share it with people who have come out to support the federation,” said Matlin, who will address the audience with the help of Jack Jason, the interpreter who has worked with her for the last 20 years. “He’s very familiar to audiences, having appeared with me on numerous TV appearances,” she said.

Although many synagogues have in recent years taken steps to become more accessible to people with challenges, Matlin has some advice for them.

“The best thing you can do for people who have different abilities and special needs is to communicate with them,” she said. “Ask them what they would like to have. You’ll find that the changes needed are slight but what you get back is enormous. Remember it’s all right there in our heritage — what we call tikun olam. We need to remember it’s our duty to heal the world, even if it’s one person at a time.”

MARLEE MATLIN was just 18 months old when an illness permanently destroyed all hearing in her right ear, and 80 percent of the hearing in her left ear, making her legally deaf.

She began acting at the Center on Deafness in a program that brought deaf and hearing children together. Her first leading role was Dorothy in The Wizard of Oz with a children’s theater company in Chicago. Matlin continued to pursue acting into adulthood, while also earning a degree in law enforcement at Harper College in Illinois.

She was involved in the Chicago theater scene for several years before landing the lead in a production of Children of a Lesser God. When the play was adapted for film, Matlin reprised her stage role, starring as Sarah, a young deaf woman who becomes romantically involved with a speech teacher — played by William Hurt — at a school for the deaf.

The 1987 performance earned Matlin a Golden Globe Award for best actress in a drama and an Academy Award, and she became, at age 21, the youngest actress to win a Best Actress Oscar and only the fourth to be awarded the honor in their screen debut.

Matlin followed that with Walker, filmed in Nicaragua, where she took time to visit deaf and hearing-impaired children, as she has continued to do throughout her travels worldwide. Since then, Matlin has starred in the features The Player, Hear No Evil, the AIDS drama It’s My Party, and What the Bleep Do We Know.

Matlin has also starred in made-for-TV films and series, including her own NBC series Reasonable Doubts, and the Emmy Award-winning Picket Fences for CBS. She was twice nominated for both a Golden Globe Award as best actress in a drama and the People’s Choice Awards, and has been nominated for four Emmy awards for her guest appearances on Seinfeld, Picket Fences, The Practice, and Law and Order: SVU. She starred for seven years on the award-winning drama The West Wing.

Matlin is a national celebrity spokesperson for American Red Cross and was instrumental in getting legislation passed in Congress supporting closed captioning. She also serves on the boards of a number of charitable organizations, including the Children Affected by AIDS Foundation and Easter Seals.

She and her husband, Kevin Grandalski, have four children. – DEBRA RUBIN 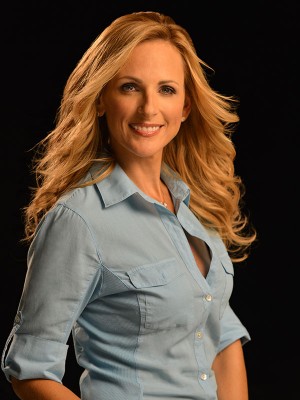