Deaf Dancing With the Stars contestant Nyle DiMarco said he does not wish he was able to hear because he is happy as he is.

The 27-year-old model and actor, who was born deaf, said he has never considered getting an cochlear implant or hearing aid because he is ‘comfortable, confident and independent’ as he is.

Content: Nyle DiMarco, 27, pictured with his dancing partner Peta Murgatroyd on DWTS, said he has never sought a cochlear implant or hearing aid

Skilled: The model and actor, who is in the final five on Dancing With the Stars, has more than 25 family members who are also deaf

Normal: Nyle, who was born in Queens, New York, said growing up around other deaf people and going to a deaf school stopped him from feeling ‘isolated’

He was raised by his mother Donna in Frederick, Maryland, after she separated from his father in 2000.

Nyle went to a school for deaf children and communicated using American Sign Language but at home he would play with non-deaf children who lived nearby.

Because he was so used to spending time with adults and children who were also deaf, he said hearing to him was ‘just as different as me being deaf’.

He said his upbringing, largely around deaf people, made his interactions with hearing people easier because he did not feel ‘isolated’.

Self-assured: Nyle said he is ‘comfortable, confident and independent’ as he is

Spotlight: Nyle, pictured on the show, said he has known his ‘deaf identity’ since birth

If he had gone to a public school or had a hearing family he said ‘being deaf would have become my identity’.

Nyle went to Gallaudet University in Washington, D.C., the only deaf university in the US, where he studied mathematics, and went on solo trips to Europe and Columbia.

He said traveling on his own was easier for him than for a hearing person because rather than trying to communicate verbally he used gestures.

He added: ‘Since I knew my deaf identity since birth, it wasn’t hard for me to be comfortable, confident and independent in the hearing world.’

He moved to Florida where he planned to get a job teaching but he was soon contacted by the makers of drama Switched At Birth.

Headhunted: Last year Nyle was contacted by producers of America’s Next Top Model who had spotted his Instagram account

Recognition: They invited him to audition for the show and he went on to win

Multi-talented: Nyle, pictured far left with fellow models, had never danced before appearing on DWTS but he has been praised by judges as ‘America’s next top dancer’ and ‘terrific’

Last year he was contacted by producers of America’s Next Top Model who had spotted his Instagram account and invited him to audition and he went on to win.

Nyle had never danced before appearing on the show but he has been praised by judges as ‘America’s next top dancer’ and ‘terrific’.

He said he did not want to give anybody an excuse to say that ‘deaf people can’t dance’ so he embraced the challenge.

Nyle, who is one of five remaining contestants on the show, is given signals by his partner, professional dancer Peta Murgatroyd to guide him through the dances, but often he does not need them.

She said: ‘Nyle just exudes light and makes me believe I can do anything.’ 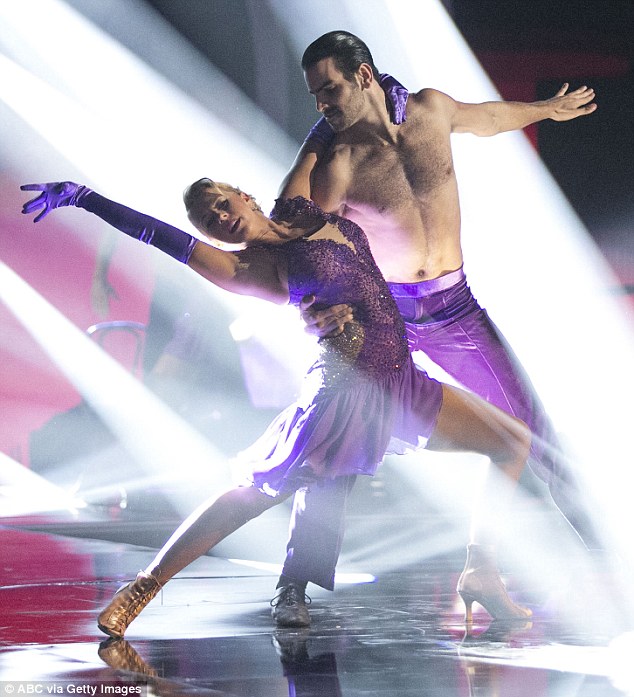