Marlee Matlin tells how she overcame deafness to achieve success

Academy Award-winning actress Marlee Matlin said that key people in her life instilled in her the confidence to believe she could accomplish anything, despite her deafness.

When the doctors urged her parents to send her away to a school for the deaf, she said, they refused, asking, “But who will tuck her in at night and tell her they love her?”

When she was told that it was unlikely that she could have a bat mitzva ceremony, her rabbi worked with her on mastering the reading of the Torah portion.

When she was discouraged from pursuing an acting career, it was actor Henry Winkler who told her she could do “anything you want.”

“I can do everything but hear,” Matlin told the 350 women who gathered at the Main Event luncheon of Women’s Philanthropy of the Jewish Federation in the Heart of NJ, held May 22 at Ocean Place Resort and Spa in Long Branch.

The program focused on a key federation mission — to support the vulnerable and generate a spirit of inclusiveness in the community. Honorees were three organizations that assist individuals with special needs and their families, all federation beneficiaries: the Friendship Circle, sponsored Chabad of Western Monmouth County; Hand in Hand, run by Chabad of the Shore; and Yachad, affiliated with the Orthodox Union.

Federation executive vice president Susan Antman noted that in a world of video and movie superheroes, it was people “who give in ordinary life” who are the real superheroes.

Event cochair Louisa Liechtung of Wayside said the federation “is the way Jews help Jews all over the world. It’s tikun olam in action,” while cochair Debbie Friedman of East Brunswick noted, “It was a privilege to work with a committee and be around people that make it all happen.”

The other cochair, Iris Acker of Long Branch, said she believed Matlin was “a natural” to convey the spirit of giving within the Jewish community.

Building on that theme, Matlin said that it is through “the combined spirit of hesed and living life generously we will heal the world.”

“My parents passed along these values to me,” said Matlin through her sign interpreter of 30 years, Jack Jason. “Despite the odds, in the Matlin household it was all about connecting with each other through our Jewish values, and most of all, a whole lot of chutzpa.”

Matlin said she saw herself as no different from others and recalled skating through her neighborhood imagining herself as the iconic TV character Marcia Brady — “except deaf and also Jewish.”

Matlin lost her hearing at 18 months for unknown reasons. She is the only member of her family — she is married and has four children — without hearing.

When Matlin was a child, growing up in a Chicago suburb, her family remained supportive and reassuring when other children sometimes made fun of her hearing aid and speech patterns. When she expressed a desire to become a bat mitzva, her parents joined Congregation Bene Shalom in nearby Skokie, Ill., a synagogue particularly welcoming to the deaf. This gave her, she said, a community to belong to and a rabbi who knew how to sign and who helped her learn Hebrew words phonetically.

“On my bat mitzva day, I was a very proud Matlin,” she recalled, adding that when she looked at her family as she read from the Torah, she noticed that instead of smiling they were crying “because their little girl was fulfilling a dream.”

Matlin said she also began to cry, only to look down horrified that her tears had stained the Torah parchment. When she later apologized to the rabbi for ruining the sacred text, he told her her tears “were a wonderful mitzva” that only made the scroll more special.

When Matlin expressed a desire to be an actress, her parents enrolled her in the Chicago-based International Center on Deafness and the Arts.

While others scoffed at her acting ambitions, Winkler, who befriended her in her youth — she described him as “one cool Jew” — told her, “Marlee, you can be whatever you want to be, and your dreams will come true.”

Eight years later she was on stage at the Dorothy Chandler Pavilion, Oscar in hand, “the first deaf person to ever win an Academy Award,” said Matlin, who won as Best Actress for her performance in the 1986 film Children of a Lesser God.

Winkler, best known for his role as “the Fonz” on television’s Happy Days, was bullied as a child for his slowness, only to learn as an adult that he suffered from dyslexia. The two became close, and Matlin lived with Winkler and his wife, Stacey, for two years and later was “married under a huppa” on their front lawn.

It was Winkler she turned to when others said her Oscar was the result of a “pity vote.” Matlin recalled him quoting Theodor Herzl, founder of the modern Zionist movement: “If you will it, it is no dream.”

Matlin took Winkler’s words to heart, gaining renown on stage, in television and the movies, and as a producer and becoming the first deaf person to compete on Dancing with the Stars.

Attendee Edith Levine of Little Silver, who was born with a genetic hearing loss, said she “was moved to tears” by Matlin’s recollections. “I think it’s so important what her parents did for her that enabled her to achieve what she has,” said Levine.

Another attendee, Ann Sachs of Ocean Township, said the Main Event was uplifting because “the room was filled with love.” 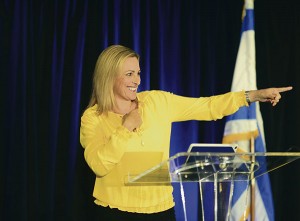