Marlee Matlin is leading a crowdfunding campaign to raise money for her and her Spring Awakening castmates to perform at the 2016 Tony Awards.

The Emmy and Golden Globe winner made her Broadway debut in the revival of the musical last autumn (15), and the acclaimed production, which was performed in English and American Sign Language simultaneously, is up for three Tony Awards, including Best Revival of a Musical.

Now Matlin, her castmates, and the creatives of Spring Awakening, which concluded its limited run in January (16), have turned to their fans in hopes of raising enough money via a Kickstarter campaign to get them on the Tonys.

The campaign was launched by bosses at Los Angeles’ Deaf West Theatre, the company which first produced the musical in 2014 and helped bring it to Broadway.

A statement on the Kickstarter website reads: “Since our limited run ended in January, we don’t have the funds to pay all the expenses associated with the performance. We need to fly our cast back to New York, we have to get the costumes and instruments and props out of storage, we have to pay for rehearsal space since we don’t have a theatre, etc. And then there’s the actual expense of performing on the broadcast!”

The initiative is a full circle experience for Deaf West, since they used Kickstarter to fund their first production of Spring Awakening in a small venue in downtown Los Angeles.

Since the launch of the campaign, Matlin has stormed social media to urge her followers to donate to the fundraiser, even calling on her celebrity friends such as James Franco, Andie McDowell, and Glee alum Jenna Ushkowitz, who appeared in the original Broadway production in 2008, to help fund the project.

Matlin tweeted: “The cast of #SpringAwakening has a chance to perform @ the Tonys but we need your help. YOU can help CHANGE THE WORLD. You are 325,000 STRONG! Even if 2/3 donate ONE DOLLAR or MORE, #springawakening can perform at the Tony Awards.”

The revival of Spring Awakening also starred Camryn Manheim, Broadway veteran Patrick Page, There Will Be Blood actor Russell Harvard, Smash alums Krysta Rodriguez and Andy Mientus, and was directed by Michael Arden, who is also up for a Tony for Best Director of a Musical. 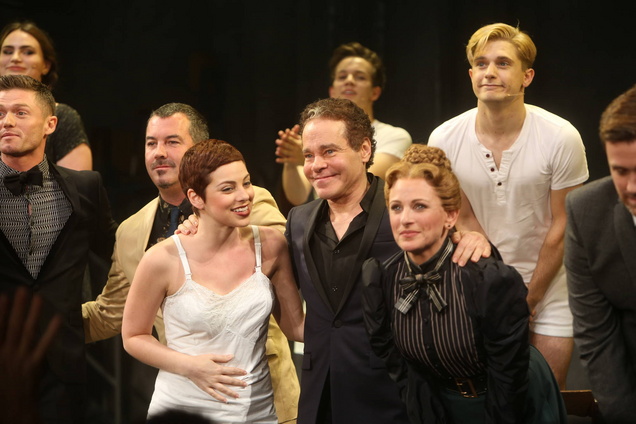