She recently showed off grey tresses as President Alma Coin in the final episodes of The Hunger Games.

And on Wednesday Julianne Moore continued the trend as she was spotted in character for upcoming drama Wonderstruck.

The 55-year-old showed off the more mature look as she joined costar Oakes Fegley on the Queens set of the Todd Haynes picture.

Moving the clock forward: Julianne Moore showed off a more mature look as she was spotted with costar Oakes Fegley on the set of upcoming drama Wonderstruck in Queens on Wednesday

Lady in red: The actress’s famous red tresses were nowhere to be seen as she showed off grey locks on set (pictured at the Screen Actors Guild Awards in January)

Julianne’s famous, red tresses were nowhere to be seen as she sported grey locks, worn in a center part and pulled back into a chic, low style.

She wore a long-sleeved, bright orange top, which the Oscar winner sported with the sleeves rolled up to just past her wrists.

The loose-fitting top featured a collar, and was accessorized with a patterned, black scarf tied into a bow.

Ray of sunshine: The beloved actress was clearly in good spirits for filming as she showed off a smile while walking around on set

In good company: Julianne was joined on set by her young costar Oakes

The mother-of-two was also seen wearing a pair of fitted, white jeans as well as stylish, strappy sandals.

Julianne accessorized with a pair of maroon sunglasses, and sported a few pieces of statement jewelry as well, such as a large ring.

She was joined by young costar Oakes, who sported a short-sleeved, blue plaid button down along with khaki trousers.

Leading man: Oakes stars as Ben, who lives with his family in Minnesota in 1977, and runs off to New York following his mother’s death when a mysterious note shows up

Glamorous: Julianne, meanwhile, plays film actress Lillian Mayhew, who leading lady Rose (Millicent Simmonds) runs off to New York City to meet, after escaping the New Jersey home she was locked in in 1927

He coupled those with a pair of brown, low-top sneakers, and carried a backpack slung across his back as they walked through the park.

Wonderstruck – based on the novel by Brian Selznick, who also wrote The Invention of Hugo Cabret – follows the intertwined narratives of two deaf children, Ben and Rose.

Ben (Oakes) lives with his family in Minnesota in 1977, and runs off to New York following his mother’s death when a mysterious note shows up.

In good hands: The movie is being helmed by Carol director Todd Haynes, with whom Julianne had previously worked on Far From Heaven, which earned her an Oscar nod

Shades of grey: Julianne previously showed off grey locks as she starred as President Alma Coin in the final chapters of The Hunger Games saga (pictured)

Rose (deaf actress Millicent Simmonds), who is locked in a house in 1927 New Jersey, also escapes to New York to see her idol, film actress Lillian Mayhew, as reported by Deadline.

The upcoming drama also features Michelle Williams and Gotham’s Cory Michael Smith, and is due in theaters in 2017. 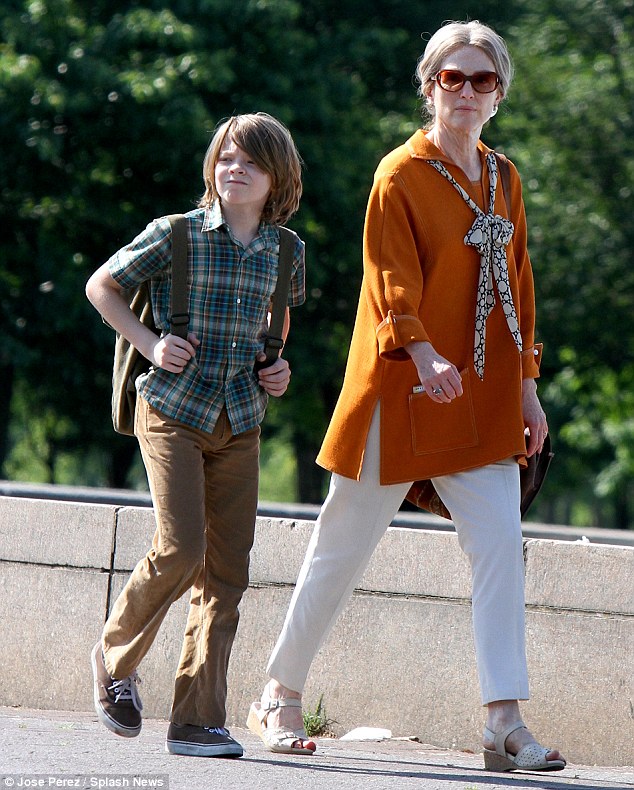