Michael Arden Looks Ahead to "Merrily" and Back on "Spring Awakening"

Michael Arden “cursed the Internet gods” on the morning of May 3. The veteran actor, who made his Broadway directing debut several months earlier with his Deaf West Theatre revival of Spring Awakening, was trying to watch the 2016 Tony Award nominations on his phone, but the connection wouldn’t work. Then something more pleasant happened: He started receiving congratulatory messages from his friends and family. Arden, on his first go at the helm of a major musical, became a Tony nominee.

Directing Spring Awakening marked a big career move for Arden. He made his Broadway debut as an actor with Deaf West’s revival of Big River in 2003, and he has wowed audiences in musicals ranging from Bare to The Hunchback of Notre Dame. But now with Drama Desk and Tony nominations, as well as a 2016 Outer Critics Circle Award to his name, he’s looking ahead to a busy future, with directing currently his top priority.

This summer, he’ll helm the classic Lerner and Loewe musical My Fair Lady at the Bay Street Theater in Sag Harbor, and will follow that up with a winter in Los Angeles directing Sondheim and Furth’s Merrily We Roll Along at the Wallis Annenberg Center for the Performing Arts. The Wallis, now under the artistic leadership of Paul Crewes, also recently named Arden its artist in residence.

Arden’s docket is extremely full for the foreseeable future, but he’s not complaining. He’s happy to stand outside of the spotlight as he allows others to “achieve their potential.”

Michael Arden is a 2016 Tony Award nominee for his direction of Spring Awakening.
(© David Gordon)

How does it feel to be a Tony Award-nominated director?
It’s really thrilling, especially because this show wasn’t something that we set out to be on Broadway. We wanted to create a platform for these incredible, and so often overlooked, talents to tell a really important, timeless, and timely story — and to shed some light on what happened in deaf culture not too long ago that, because of the nature of it, had been so silenced. To be nominated after the show finished its New York moment is especially lovely.

What made you decide to transition to directing?
I think I had always wanted to do it. I had taken a directing class in high school. Looking back on it now, I think it was all heading that way. I was in Los Angeles, living there and working on a sitcom for quite a while, and just feeling like I really wanted to be doing theater. The opportunities as an actor weren’t coming like I had hoped, and I wasn’t feeling very fulfilled artistically. I said, “I’m just gonna get my friends together,” because so many were feeling the same way I did about wanting to be able to create work, and I started this ragtag theater company in LA. I was like, “I love bringing people together and helping them achieve their best work.” I sort of haven’t looked back since.

In the case of Spring Awakening, how did you create such a beautifully diverse company, considering that most of the cast had a major physical disability?
From the very first second, I made it clear to the company that every single member is of equal importance. There is no distinction, no echelon of actors within a company. A company is only as strong as its weakest link. We had warmup together every day, because everyone depends on each other when they’re doing a show, especially in the case of Spring Awakening.

I really believe [that] there’s nothing more exciting for an audience than to see a company breathing together, all completely in sync and in harmony onstage. That’s when magic is created. Magic in plays and musicals, I think, is more often created because of the work of an incredible company rather than a single component. I made sure it was about being together and telling the same story.

Next up for you is My Fair Lady at Bay Street Theatre in Sag Harbor. Is this a show you’ve always wanted to direct?
I’ve always loved the show. I hadn’t actually thought to direct it just because I assumed it would never happen. I think Cameron Mackintosh owns it, and I thought, “Oh we’ll see some enormous production one day.” And I knew Trevor Nunn, who’s sort of been my mentor for many years, gave us a really definitive production. But [artistic director] Scott Schwartz came to me with the idea of doing it with two pianos. I gave it a read and I watched the film again and got really excited about this play and what it says about ownership, and creation, and how people like to own each other. I’m really excited to get to explore that at Bay Street with incredible design by Dane Laffrey. He was my high school roommate at boarding school.

You just did a workshop of Merrily We Roll Along with Steve Kazee, Tituss Burgess, and Marissa Jaret Winokur at the Wallis-Annenberg Center in Pasadena.
We did what we call “R&D,” Research & Development. We tried new things and it was so exciting to be able to do work without having to show anyone anything. We didn’t even have a presentation on the last day. It was such a breath of fresh air to be able to play without the pressure of performing. It really freed up the process a bit, especially with a piece like Merrily, when there’s a billion things I want to try. I wish I had more than a week.

What do you think about the Los Angeles theater scene overall?
It’s a really exciting time in Los Angeles for theater. I think it’s so long been a place where people have said, “Oh, New York is the theater town, L.A. isn’t.” But I was in a rehearsal room in L.A., not only with Spring Awakening but Merrily, and thinking, “God, the stuff that we’re able to do here is so exciting and the talent is so great.”

Is directing more fulfilling for you than being an actor?
I think directing is more fulfilling to me. I definitely will act again, but I feel like I get to act through people. As an actor, most of the work is getting out of your own way, and if I can help someone get out of their own way to achieve their potential, that’s more exciting than standing in the spotlight for me.

Marissa Jaret Winokur, Steve Kazee, and Tituss Burgess took part in a research and development staging of Merrily We Roll Along, directed by Michael Arden.
(© Casey Kringlen)
Michael Arden Looks Ahead to “Merrily” and Back on “Spring Awakening” 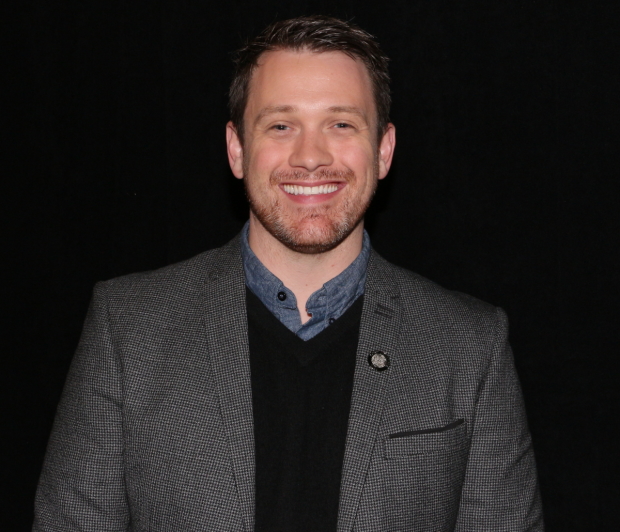