Mary Durheim chairs the Texas Council for Developmental Disabilities, even though her term on that panel was supposed to end more than five years ago on Feb. 1, 2011.

She’s one of 336 holdover appointees in Texas — people whose terms on one of the state’s boards or commissions have expired but whose replacements have not been named. The terms of another 20 gubernatorial appointees will expire between now and Sept. 1. Those numbers do not include people appointed by the lieutenant governor and the speaker; for instance, two holdover members of the Texas Ethics Commission were selected by those officials and not by the governor.

During their four-year terms, Texas governors can appoint about 3,000 people to serve in various citizen roles in government. They range from the very prestigious and powerful — university regents, boards that oversee the state police, the prison system or state parks are all examples — to the prosaic, like the Real Estate Research Advisory Committee or the Texas 2036 Commission.

Gov. Greg Abbott has made hundreds of appointments since he took office in January 2015, but he is still working his way out of a backlog. Durheim is the longest-tenured holdover, one of nine appointees whose terms in office ended before Abbott took the oath of office. The others are:

• Susan Ridley, Governing Board of the Texas School for the Deaf, whose term expired Jan. 31, 2013.

Abbott aides say part of the reason for the high number is that the governor didn’t inherit a backlog of applications from his predecessor, Rick Perry. Perry’s office, as is the custom, junked those files on the way out to make way for the new chief executive.

The appointees can stay in office as long as they are eligible — alive and Texan, basically — and have not been replaced, regardless of the length of their actual terms. Even high-profile appointees, like Shaw at TCEQ and Harrison at Ethics, sometimes remain long after their expiration dates.

Once in a while, that raises some hackles. Empower Texans, a conservative advocacy group that has been warring with the Texas Ethics Commission, recently called on Abbott and other state leaders to replace the four commissioners at that agency whose terms have expired. Two of those would be gubernatorial appointments.

“We have for some time been concerned with the use of the Texas Ethics Commission by certain elected officials as a vehicle to harass and silence the voice of the people during their participation in the political process,” they wrote in a letter to Abbott also signed by officials with several other conservative organizations. 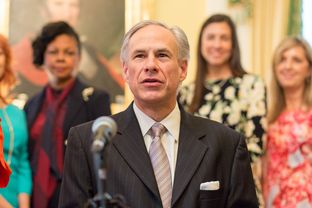