Newport Teacher of the Year Named

Tricia Donnelly, center, is congratulated by Newport Schools’ Assistant Superintendent Jen Booth, left, and Colleen Jermain, Superintendent, on being named Newport’s Teacher of the Year. (Photo by Jen Carter) Tricia Donnelly, a fourth-grade teacher at Pell Elementary School, was honored on Tuesday, May 31, as the Newport Teacher of the Year. Prior to the presentation, Pell Assistant Principal Traci Westman praised Donnelly as “an excellent communicator to her parents” and an educator who “sets high expectations for her students and not only teaches them academics, but life’s lessons.”

The announcement came as a complete surprise to the recipient, who says that the school had gathered that morning for its monthly assembly to honor the Terrific Kid and Student of the Month. But when the event should have ended, Westman continued talking. She segued into a descriptive account of this year’s Teacher of the Year, and Donnelly eventually realized the assistant principal was talking about her.

“She said, ‘This year, that person is in this room, right now.’” And then, to Donnelly’s amazement, her family entered the room.

With a bachelor’s degree in sign language and a master’s in reading, Donnelly has been teaching in Newport for 17 years. Westman praised her for her commitment to her students and her willingness “to share her work with others to help them be more successful.”

“It is the most amazing feeling,” Donnelly says. “I never felt more rewarded in my life.”

But for a fork in the road, Donnelly claims she might never have followed a career as an educator. “I never, ever – ever – thought I’d be a teacher,” she says. Her plan was to become an interpreter for the deaf, and one day while studying sign language at URI she was invited to the Rhode Island School for the Deaf in Providence for a presentation. Afterwards, she said, members of an impressed faculty suggested – emphatically – that she consider becoming a teacher for the hearing impaired.

And so she did. She received a degree in elementary deaf education from Flagler College in St. Augustine, Fla. After returning to Newport, her first full-time teaching position was co-teaching second and third grade at Sullivan School. A year later came the offer to teach fourth grade, and that is where she has been ever since.

“I have loved every minute of it,” she says.

One of her favorite things: “Connecting her students as citizens [to the world]. It’s so neat to see them get it,” she adds, “and watch them enjoying everything.” She also loves the fact that as much as she loves her fourth-graders, they love her back.

“What other job can you go to where your clients smile at you all the time and love you?”

Two things motivate Donnelly. The first is her “special teacher,” Mary Diaz, who was both her second- and third-grade teacher at Underwood School. “I remember all that she did and said.” Second, she says, “I’m inspired by my kids on a daily basis, and how they plug away.”

According to Westman, Donnelly’s people skills extend far beyond the walls of her classroom at Pell. She has maintained her fluency in signing, regularly teaches it to her fourth-graders, and teaches two levels of sign classes at Salve Regina, where she also leads workshops for new student teachers. And she coaches the Rogers softball team.

Being able to give her fourth-graders the tools and perspective to take what they learn in her classroom and build upon that is a reward in itself. As for watching them make the jump from being top-dog fourth-graders at Pell to their newbie status at Thompson, she says, “I’m just doing my job. It’s what I like to do. I devote my time to the kids in front of me. They’re what’s important,” she adds. “They are still a representation of me.”

In the end, she sees their success as her own. “I want to be able to touch their lives in a positive way.”


Newport Teacher of the Year Named 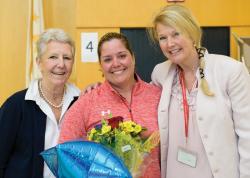