The Gift of Hearing

With a sweet, engaging smile, 2-year-old Annabella Macias works diligently on the tasks of toddlerhood, pointing to colors as her mother names them, imitating animal sounds, and dancing to the beat of music from the radio.

“Like most new moms, Maryann Florio eagerly awaits each new milestone in her daughter’s young life. But for Florio, every hard-won achievement is all the more precious: a little more than a year ago, she learned that Annabella had profound hearing loss and was not responding to any sounds, let alone trying to repeat them. Over a period of weeks this summer, however, Florio saw her daughter making huge strides in her language development.

“I almost cried when I said, ‘Annabella’ and she turned around to look at me. It’s amazing. One day, your child isn’t hearing any sounds, and the next, there are so many possibilities,” Florio says.

The dramatic transformation is the result of surgical devices known as cochlear implants, which simulate hearing in individuals who have little to no hearing, and the work of the comprehensive Pediatric Cochlear Implant Team at Robert Wood Johnson Medical School and The Bristol-Myers Squibb Children’s Hospital at Robert Wood Johnson University Hospital.

Led by pediatric otolaryngologists Michael Chee and Kelvin M. Kwong, both assistant professors of surgery at Robert Wood Johnson Medical School, the highly specialized, multidisciplinary pediatric cochlear implant team also includes audiologists, speech/language pathologists, neuropsychologists and a nurse coordinator. It is one of the most comprehensive programs of its kind in the tri-state region. Established in early 2014, it offers parents and children complete evaluation, treatment and rehabilitation services related to cochlear implants. By the end of the program’s first year, the team had completed 10 cochlear implants in children ranging in age from 13 months to 5 years old.

When Annabella was born on June 10, 2013, Florio never imagined her daughter would need these types of services; Annabella had passed her newborn hearing screening with no indications of any issues. But just three months later, Florio was noticing that there might be a problem.

“She wasn’t responding to any noises around the house. You could bang pots and pans right next to her, and there would be no reaction,” Florio recalls.  “When I brought her to the pediatrician for her 4-month-old check-up, they did another hearing test, but they got no reading off of it.”

In sensorineural hearing loss, damage to the inner ear prevents the process by which sound travels to the brain, whether due to missing or damaged hair cells, or damage to the nerve pathway itself. A cochlear implant bypasses the process, transmitting sound from an external speech processor and transmitter to an internal receiver that generates electrical pulses directly to the auditory nerve itself.

One of Annabella’s teachers at the Midland Park Schools’ early intervention program for deaf and hard-of-hearing children first mentioned the RWJ pediatric cochlear implant team to Florio, prompting her to do some in-depth online research about the team and cochlear implants in general. What she discovered had her reaching out to learn more, she says.

Months of tests followed, including MRIs, CT scans and genetic testing, which revealed that Annabella has connexin 26 – a protein found on the GJB2 gene that disrupts potassium flow in the ear and is the most common cause of congenital sensorineural hearing loss.

“With the first implant, we noticed that, yes, she could hear something. But as soon as she got that second implant, it was like a switch was flipped and everything started to go really quickly,” Florio says. “She’s trying to say her ABCs, she knows about eight different colors and the noises of different animals – says ‘ooo’ for ‘moo’ – and has really started catching up a lot quicker than what was expected. It’s wonderful. She’s babbling, making noises and starting to sing. She knows the difference between when people are speaking and when they are singing. Every time she hears music, she stands up and dances.”

Florio is well aware that the process is just beginning. Annabella is involved in classes and therapy four days a week, including sessions with a speech therapist, as well as twice-weekly classes where she interacts with other children who have hearing loss. She sees a member of the cochlear implant team every few weeks for “mapping,” or adjustments to the sound programming of the device. Once mapping on both sides is complete, Annabella will return annually for any necessary tweaks to the programming, Florio says.

“It can take approximately a year to stabilize the sound mapping so the implant can be customized to each child’s individual hearing loss,” explains Kwong.

“While the surgery itself takes only a few hours, and most children are home the same day, it’s not just a simple procedure and then you’re done,” he adds. “The process is very labor-intensive after the surgery, and a committed team is needed to help lay the groundwork for success.”

It takes dedication from the family and everyone else involved, agrees Chee.

“It’s very intensive, but fortunately there is a lot of support from the team. They are not in it alone,” he says.

Clinical developmental psychologists with the Institute for the Study of Child Development in the medical school’s Department of Pediatrics work with the program to help families understand the developmental and cognitive potential of their young child, consider potential obstacles and help them cope with the stresses and anxieties associated with the procedure. After surgery, they also are available to assist as children learn to understand new sounds and adjust to life with their implant.

In addition, the Pediatric Cochlear Implant Team has developed partnerships with other organizations – for example, schools for the deaf and school systems that have programs for children who are deaf or hard of hearing – to identify children who may benefit from cochlear implants, as well as provide further support to the child post-procedure.

Improving the Chances of Success

“There was a real need in Central Jersey for this type of service,” Chee says.

As many as three out of every 1,000 children in the United States are born with a detectable level of hearing loss in one or both ears, according to the Centers for Disease Control and Prevention. Nine out of 10 babies born with hearing loss are born to hearing parents.

“In the past, some kids wouldn’t be identified with hearing issues at all until they were 3 or older,” says Chee. “That number has gone down with the universal newborn hearing screenings, but even now we see children being identified at 3, 4 and even 5 years old.”

The earlier that children are identified, the better the chance of success, say Chee and Kwong.

For children who are born deaf or with profound hearing loss, there is some limit on the maximum age at which cochlear implants can be performed – usually 5 or 6 years old – because the brain can only go so long without any aural stimulation, Kwong explains: “At that late stage, they may have sound awareness as a result of the implant, but it would not be meaningful enough to have normal speech recognition.”

As a result, the best possibility of success is with children who are between 1 and 2 years old, says Chee, because they will be exposed to sounds during an optimal period to develop speech and language skills. In fact, a growing body of research has shown that when children receive a cochlear implant followed by intensive therapy before 18 months of age, they are better able to hear, comprehend sound and music, and speak than their peers who receive implants when they are older, according to the National Institute on Deafness and Other Communication Disorders.

Like most medical procedures, cochlear implants are not a good fit for everyone. Individuals whose hearing is improved by hearing aids, or who have conductive hearing loss, which results from problems with the ear canal, ear drum, or middle ear and its ossicles, would not be candidates for cochlear implants, for example. The amount of work needed afterward by the child and family also requires commitment and a strong support system to be in place. RWJ’s Pediatric Cochlear Implant Team conducts an intensive process to determine which individuals would be most appropriate and reap the largest benefit from the procedure.

“We meet every month with all members of the team to discuss prospective cases. It’s not always a straightforward decision. Family support is critical,” Kwong says.

The team also meets with family members to discuss what they hope the results of the implantation will be, so the team can set realistic expectations, he says. For example, speaking fluently following the surgery may be possible for some children, but not all, and many factors –physical and otherwise  can affect the success of cochlear implants for each child. As a result, Kwong says, the team develops an individualized plan and goals and shares them with the family so that everyone is on the same page with regard not only to the possibilities for their child, but also to the work needed to help the child make the most of the implant.

Besides expanding access to cochlear implants for children in the area who are deaf or have profound sensorineural hearing loss, the team hopes to add to the research being conducted on this technology. They have proposed additional research with the Institute for the Study of Child Development to explore such issues related to pediatric cochlear implants as the development of hearing and/or speech and a comparison of outcomes based on the different ages at which a child has the procedure, says Kwong.

They also hope to focus on increasing general awareness, Chee says. “We follow children who are very borderline – they’re developing some language, but are very hard of hearing, even with hearing aids – or those whose hearing loss might progress to the point they might benefit from cochlear implants, to be sure they don’t just fall through the cracks. With the advent of universal hearing screening, there should be no reason for a child to have profound hearing loss and not at least be offered a chance for hearing,” he says.


The Gift of Hearing 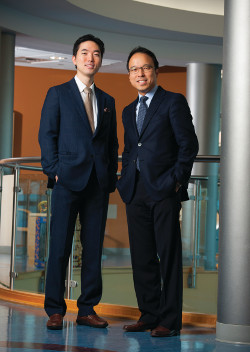